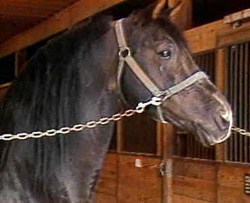 Police have made an arrest is what appears to be a case of carriage-jacking in St Louis, Missouri.

The incident occurred on Tuesday about 8.25pm near the corner of 8th Street and Chestnut, as the southbound carriage driver was returning to the barn.

It is alleged a man jumped on the carriage and hit the driver, identified in local media as Larry Turner, of Granite City, over the head with a cane, breaking the stick in the process.

Turner, 60, a former jockey, jumped from the carriage and the offender took the reins.

The horse, Harry, a 10-year-old black Percheron draft horse, sensed trouble and took off at a gallop back towards his barn, but the carriage, operated by the St Louis Carriage Company, collided with a trolley car just as it arrived at home base.

A barn employee emerged to remove Harry from his harness and, spotting trouble, worked desperately to separate Harry from the carriage.

He did so, and it is alleged the offender then got off the carriage and attacked the horse.

Meanwhile, two soldiers who saw the initial carriage-jacking unfold had stopped their car and picked up Turner. The three set off in pursuit of the carriage. They also arrived in time to intervene to protect Harry.

A man, 40, has been arrested on charges of second-degree robbery, third-degree assault and animal abuse.

Harry was checked over by a veterinarian. The horse was given the next day off and received a massage.