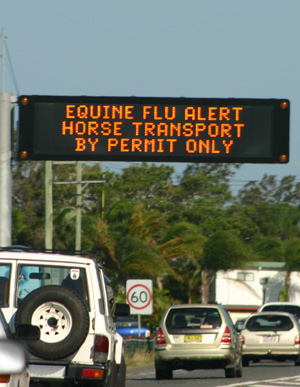 Researchers from Australia and New Zealand have identified weather conditions that appear to aid the airborne spread of the highly infectious equine influenza A virus.

Their findings have been published in the open-access journal, PLoS ONE.

Researchers from the University of Sydney, Massey University, and the New South Wales Primary Industries Department used data gathered on the spread of the disease during the outbreak in Australia in 2007, in which the disease spread rapidly through a population never before exposed to the virus.

Over the course of four months, nearly 70,000 horses were infected on over 9000 premises in New South Wales and Queensland.

Prompt and complete implementation of a horse movement ban was widely credited as the most effective control measure that led to the rapid eradication of this disease from the Australian horse population.

Although vaccination was used to ultimately eradicate the disease, its use only began six weeks into the outbreak, well after the peak of reported daily infections.

Contact-tracing early in the 2007 outbreak revealed that the disease initially spread through a network of equestrian events, linked by the movement of infected horses before detection of the outbreak, producing clusters of infected premises in widespread locations.

Inquiries into the outbreak noted rare instances of presumed windborne spread over short ranges – up to 1.5km, and rarely up to 5km – based on failure to identify other potential means of transmission, such as close contact or movement of the virus on fomites -intermediate inanimate objects, such as vehicles or horse equipment.

The authors noted that the influences of relative humidity and ambient temperature on the transmission of influenza A viruses had recently been established under controlled laboratory conditions.

“The interplay of meteorological factors during an actual influenza epidemic is less clear,” they said, “and research into the contribution of wind to epidemic spread is scarce.”

The researchers set about quantifying the association between hazard of infection and air temperature, relative humidity, rainfall, and wind velocity from the 2007 outbreak.

They found that the risk of equine influenza infection was higher when relative humidity was lower than 60 per cent and lowest on days when daily maximum air temperature was 20 to 25 degrees Celsius.

Wind speeds greater than 30kmh from the direction of nearby infected premises were associated with increased hazard of infection.

“Our analysis supports, and extends, the findings of studies into influenza A transmission conducted under laboratory conditions,” they wrote.

“The relationships described are of direct importance for managing disease risk during influenza outbreaks in horses, and more generally, advance our understanding of the transmission of influenza A viruses under field conditions.”

The full study can be read online.

» More on EI and biosecurity