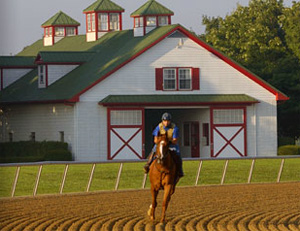 Racing’s famous Calumet Farm has been sold to a trust for nearly $36 million.

The 800 acre farm in Lexington, Kentucky, has been sold by the heirs of aviation magnate Henryk de Kwiatkowski to the Calumet Investment Group Trust, and leased by Brad Kelley. De Kwiatkowski, a Polish-born Canadian citizen who bred and raced Horse of the Year Conquistador Cielo and the stallion Danzig, bought the property in 1992 for $17 million.

Founded by William Monroe Wright in 1924, Calumet was originally a standardbred farm but after Wright’s death, it was converted to a thoroughbred operation by his son, Warren Wright Sr in 1932. The farm stayed in Wright family ownership until 1992 when it was sold at auction after being declared bankrupt under the management of J.T. Lundy.

Calumet Farm won the 1990 Eclipse Award for Outstanding Breeder. Later that year information over the death of Alydar and the collection of a $36 million insurance policy was revealed. After years of legal wrangling, J.T. Lundy and  the farm’s former attorney and chief financial officer Gary Matthews were convicted of fraud and bribery and sent to prison.

The farm bred and raced Triple Crown winners Whirlaway and Citation and numerous other classic winners and champions.

The farm’s breeding success was anchored by a part ownership in the British import Blenheim II, and foundation sire Bull Lea. Calumet Farm produced eight Kentucky Derby winners, more than any other operation in US racing history. From the farm’s many great foals, two colts became US Triple Crown winners and three females won the Triple Crown for fillies.

A statement from the new owners said they planned “to continue to maintain Calumet Farm in its historic and visible setting.”