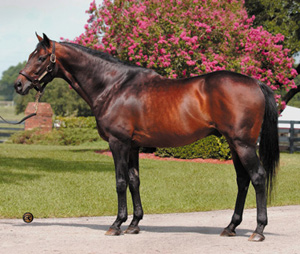 Thoroughbred stallion Skip Trial, the sire of 1998 Horse of the Year Skip Away, died this week at the age of 30.

The death of Skip Trial was announced by Bridlewood Farm in Ocala, Florida, where he had stood for his entire stud career, since 1988. He had been pensioned from stud in 2010 and was euthanized on May 1 owing to the infirmities of old age and will be buried in the farm cemetery

“In my mind, he was a throwback to the Thoroughbred of yesteryear, with his rugged looks and hickory toughness.  He was a proven source of soundness and stamina, which he demonstrated on the racetrack in the mid-1980’s through his earnings of $1.8 million.  During his service at stud, he always had one of the highest national rankings for average earnings per starter.  He was a ‘special’ horse and noble equine friend, who will be sorely missed.”

Bred in Kentucky by Nancy Penn Morgan, the bay son of Bailjumper out of Looks Promising, by Promised Land, was sold at the 2003 Keeneland September Sale for $25,000. Racing for Mrs Zelda Cohen, he competed at the top of his generation for three consecutive years, winning nine Graded stakes, including the Haskell Invitational (G1) over Champion Spend a Buck at three, and the Gulfstream Park H. (G1) at four and at five.