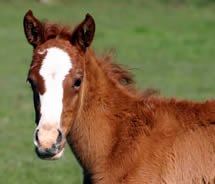 Ways to improve horse vaccinations and defend foals against pathogen challenges at an early age are being studied at Kansas State University.

“It is important, especially in the equine world, to vaccinate the foals as soon as possible so they will be protected against environmental pathogens they may come into contact with, even at an early age,” Bryan, from Huntington Beach, California,  said.

Bryan recently received a second place award at the K-State Research Forum for her oral research presentation titled “Characterization of immune activation in healthy foals when vaccination is initiated at three months of age.”

Foals acquire antibodies and immune cells from their mother that help protect them from environmental pathogens before they can fully develop their own immune systems, Bryan said.

Newborn foals acquire these maternal antibodies and cells through ingestion and absorption of colostrum.

Foals are usually vaccinated at six months of age, which gives time for maternal antibodies to decline so they do not interfere with any vaccines. But Bryan is looking at the possibility of vaccinating foals at three months of age. The earlier age is better because it gives foals more protection against pathogens earlier in life.

“We’re trying to determine whether those maternal antibodies are still in high enough concentration at three months to interfere with vaccines and block the active immune response or to see if these antibodies have waned enough to allow a robust immune response,” Bryan said.

Bryan is still collecting and analyzing data. Preliminary data has indicated an immune response in three-month-old foals, making it possible to vaccinate foals at a younger age and increase protection.

Although Bryan has always been interested in the immune system, she got involved with equine research after spending a summer in the university’s Veterinary Research Scholars Program, which is funded by the National Institutes of Health, or NIH, and Merial, a worldwide animal health company.