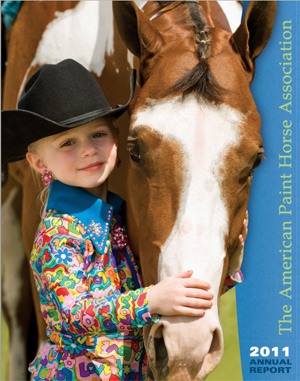 The American Paint Horse Association registered its millionth horse in 2011, a milestone in the 50th anniversary of the association.

The APHA, which is the world’s second-largest stock horse breed association, recently released its 2011 Annual Report, which details its worldwide accomplishments.

This growth has fueled the need for knowledge and training. France hosted the first Youth Horsemanship Camp and Germany held its first Youth Judging Seminar. Each of these events helps provide the structure and support for building leaders for the future of international clubs and members.

In the United States, lifetime memberships for Youth continue to grow, along with the new Walk-Trot Amateur division. The top five states for APHA membership over the last three years remain Texas, California, Oklahoma, Colorado and Florida. APHA shows in Texas and Missouri experienced significant increases in the number of shows and number of entries.

The American Paint Horse Association honored some outstanding members in 2011. A prominent hallway in the APHA headquarters was designated the Wonderlich Hallway, honoring Doc and Butch Wonderlich, of Twin Falls, Idaho, and the 2011 Distinguished Service Award was given to an international member for the first time. German member Hardy Oelke was presented the award by incoming APHA President, Scot Jackson, at the European Paint Horse Championship in Kreuth, Germany, in October.

Oelke helped to cultivate Europe’s love affair with Paint Horses beginning in the 1970s. A pioneer in Western riding, he helped found the Paint Horse Club Germany, and organized its involvement in the Equitana and Americana events.

Oelke’s commitment to Paint Horses extends beyond any one style of riding; he also helped bring Paint racing and APHA’s first approved show to Europe.

Through his love of photography and writing, Oelke brought vivid illustrations and moving descriptions of the Paint Horse to its rapidly growing fan base overseas. His book, The Paint Horse: An American Treasure, examines Paint Horse history and culture. Originally published in German, the book was translated into English and garnered success across the globe.

As a breeder, trainer and exhibitor he has greatly improved the quality of Paint Horses in Europe. He trained and showed the first APHA Champion in Europe named Clarke Kent. Hardy was the first European to compete at the APHA World Show. He has also imported numerous quality Paints and helped others do the same.

“Hardy has been a driving force behind the success of our breed internationally,” said APHA Executive Director Lex Smurthwaite. “He has generously and freely given service that has resulted in continuing, valuable and lasting contributions to APHA.”