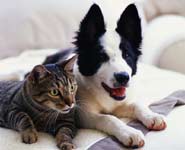 British charities have voiced concern over the growing number of neglected or abandoned equines, but it seems the situation is little different with cats and dogs.

A new study estimates that more than 260,000 cats and dogs entered the care of Britain’s rescue organisations during 2009, the first full year since the onset of the recession.

The University of Bristol study by Dr Corinna Clark and colleagues in the School of Veterinary Sciences is published in the Veterinary Record.

Cats and dogs are popular pets in Britain, with two of the authors of the study, Dr Jane Murray  and Professor Tim Gruffydd-Jones, having previously estimated the owned cat and dog populations at about 10.3 and 10.5 million respectively.

More than 1550 welfare organisations were contacted by post, email or telephone between November 2010 and June 2011.

They were asked to provide details including the number of cats and dogs currently being cared for, whether they were operating at full capacity and for how much of the year they were full and how many cats and dogs entered their care during a full year (2009).

From the responses received it was estimated that 131,070 cats and 129,743 dogs entered the care of British welfare organisations during 2009.

In addition, 66 per cent of responding organisations that cared for cats and 47 per cent of those caring for dogs were full to capacity for 12 months of the year.

It is therefore likely that the actual numbers of cats and dogs needing assistance far exceeds the estimated figures because for the organisations that are full the intake rate will be regulated by the rehoming rate, rather than by the need for places.

Commenting on the study, Animal Welfare and Behaviour researcher Dr Corinna Clark said: “As well as highlighting the enormity of this issue, the study demonstrates the substantial efforts of welfare organisations in caring for and rehoming unwanted animals annually, many of which rely on unpaid help from volunteers.

“We will continue to support the amazing work these organisations do through our collaboration with them, for example, by studying the best ways to care for these animals and how to increase homing rates.

“I adopted a rescue puppy as a result of my involvement in this study and I hope that by raising awareness we might encourage more people to adopt from rescues. But we also urgently need to address the reasons why so many animals are ending up in rescue or being abandoned in the first place.”

One of the questions asked on the survey was why people relinquished their pets.

The researchers found answers were not always recorded by the organisations and there was also some suggestion that responses given by relinquishing owners may not always be accurate. But from the responses received it became apparent that changes in household circumstances and behaviour problems were particular concerns.

The study highlights the considerable size of the rescue cat and dog populations and the need for further investment in areas such as improving neutering rates, decreasing behavioural problems (in dogs in particular), and better education of potential pet owners about responsible ownership and the long-term commitment that is needed.

This is the first time that the rescue population has been surveyed and so the figures will also be useful to the animal health and welfare professions, including the animal welfare organisations, to assess trends in the number of cats and dogs that need a home.