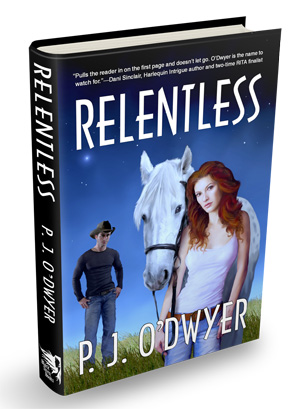 US author PJ O’Dwyer likes her heroines feisty and her heroes studly. And if there are horses involved, even better. She’s achieved that on all counts in her latest offering, Relentless.

Our Relentless contest is now closed. On offer was an autographed copy of the hardcover edition of Relentless, and a $25 Amazon gift card.

The winners were Sandra Schluter and Susan Naden.

Right from page one it’s a roller coaster ride with horse rescue farm owner Bren Ryan. While she’s struggling with the (accidental?) death of her husband, raising a couple of kids, and keeping the farm running and secrets buried, a hot stranger arrives on the scene with secrets of his own.

The darker side of the horse world rears its head and even experienced horse folks might learn a thing or two along the way.

And kudos to O’Dwyer, who is “giving back” and donating proceeds from the sales of her books to horse rescue operations.

Relentless is the first book in the Fallon Sisters Trilogy.

An interview with PJ O’Dwyer:

“As an author I feel we have a responsibility to write an engaging story that folks can enjoy and learn from. Honestly, in the beginning, I was merely looking for a suspenseful plot. I had no idea I’d discover the dirty little secret of kill buyers and horse slaughter.

“But when I realized I had the opportunity to enlighten those who wouldn’t ordinarily know about the atrocities happening to American horses, I couldn’t walk away from this story,” O’Dwyer says.

Headstrong horse rescue director Bren Ryan has been a red-headed streak of trouble for more than one man in Clear Spring. She’s grown up needling local “kill buyer” Wes Connelly, and since the sheriff ruled her husband’s sudden death an accident, Bren’s been investigating things herself. She’s certain Tom was murdered, and she’s hell-bent on cornering his killer the only way she knows how—by tempting him to do it again. And she’s the bait.

Rafe Langston came to Maryland looking for land and a fresh start. Or so he says. The sexy cowboy isn’t generous with details, but Bren couldn’t care less—until he buys half her farm at auction and moves into her childhood home. Suddenly, the last man she should befriend becomes her only ally in solving her husband’s murder.

Soon their cozy stakeouts sizzle with unexpected desire neither one can ignore, threatening his mysterious plans and her promise to never fall in love again—especially with a handsome stranger whose secrets could shatter what family she has left.

Of course with such a subject matter there are unsavoury characters, and Wes Connelly stars in this role in Relentless.

“I went to the experts and contacted a horse rescue in Minnesota who actually deals with kill buyers at auction. I asked her if she would share her interactions with kill buyers. She was happy to help and spent the better part of two hours relaying her stories to me by phone.

“I was totally blown away by one certain kill buyer and his tactics. But there was one tactic, in particular, I will never forget. It left such an impression I asked her permission to use it for the scene in Chapter Three of Relentless.”

»  Short excerpt of this scene, in which Bren (the heroine) is with her childhood friend Sheriff Kevin Bendix discussing the death of her husband.

O’Dwyer says she fell into the horse world by accident – “or so I originally thought”.

“I love animals. But in writing suspense something bad has to happen. And with Bren it had to be about the horses. I wanted my reader to care about Bren and her life’s work. I also wanted to expose the hidden truth about something so hideous. When I learned of horse slaughter, I had a hard time wrapping my brain around the senseless murders that happen every day to such a noble companion.

“On a lighter side, I’ve been told I couldn’t avoid writing about horses if I wanted to. They tell me, those who have researched our Irish heritage, horses are in our blood. My father bet on them, my cousin and uncle own them, and back in Ireland they stole them.

“I guess the sparkling shores of freedom looked a might safer than an Irish jail cell,” O’Dwyer says.

She says the toughest part of the book was the slaughter aspect.

“As a writer, there is a lot of research involved in any story, and this one was no exception. But I owed it to every horse rescuer and animal advocate to get it right.

“The hardest part for me was watching the barbaric slaughter of healthy, intelligent horses on YouTube and interviewing horse rescuers. They made me cry with their loss, and laugh at their wit and the lengths they will go, especially, to outsmart their nemesis ‘the kill buyer’.”

As for the suspense angle, O’Dwyer reckons she didn’t have much choice in that, either.

“It just seemed the natural course after I met and married my husband. It seems his dreams and aspirations had always been focused on law enforcement. Twenty-five years later, married to a state trooper, it was hard to avoid hearing about the day-to-day police work he was involved in (very exciting stuff), not to mention the camaraderie and hilarious stories, especially the interactions cops have with each other. So it was inevitable I would combine both of our passions: romance and murder. (Not that murder is his passion, only solving them.)”

O’Dwyer is now working on the second book in the series – Defiant – which is be released in September. It’s centred on Bren’s sister Kate.

“Gorgeous as she is idealistic, she wants more than just horse pastures. Only she gets more than she bargains for with the man who charmed her, because now he controls her,” O’Dwyer says.

“But she’s a Fallon and resourceful. She’ll find a way to escape multi-millionaire husband Jack Reynolds, even if he is the US Attorney for Maryland.”

The third and final book of the series – Forsaken – is about Dani, the sister neither Bren nor Kate know about –  yet. “That is until the beautiful Irish barmaid Dani Flynn finds her homeland just a spec on the horizon behind her and open seas dead ahead.

“She’s poised to change everything Bren and Kate believe to be true. And they’re not the only ones,” O’Dwyer says.

The titles of the books in the series are short and punchy – and O’Dwyer likes them that way.

“To find that one word that describes my heroine and the book is a challenge. But when I find it, it’s an amazing feeling of accomplishment. With Bren’s story, I had gone through quite a few titles,” she says.

“I know with every author we have our vices and methods to shed writer’s block. For me, it’s a good run. After three miles of just myself and the open road, my brain seems to unfurl and everything is so much clearer.

“It was just such an occasion when Relentless popped into my frazzled brain. It was like . . . Eureka! It was golden; and I loved it.

“The other two titles came naturally, and I fell in love with them with just as much enthusiasm,” she says.

But it’s not all about image and titles – there is a responsibility, too.

“As a writer, I believe we are entrusted to entertain as well as educate. Relentless gave me the opportunity to do both. Relentless became a reality for me due to the gracious nature of horse rescuers who took a call from a stranger, listened and agreed with enthusiasm to read Bren’s story, and offer their insight and knowledge.”

O’Dwyer is donating 5% for every book sold in the trilogy and any other future works to horse rescue operations: “As a way to thank them for their kindness and because their fight has become mine.”

* Follow this link to buy Relentless (and later books in the trilogy), and the author will donate 10% to horse rescue. Rescues to choose from are in most US states and provinces in Canada, along with some in the UK and Ireland, as well as Australia and New Zealand.

P.J. O’Dwyer is an award-winning author and an active member of Romance Writers of America. When asked where she gets her story ideas, she laughs ruefully and says, “It helps being married to a cop.” She lives in Maryland with her family. Visit her website at pjodwyer.com, or connect on Facebook, Twitter, or Linked In.

“O’Dwyer is a master at putting emotion to paper and making it convincing. Relentless is high intensity at its best.”—All Books Review

“Everything a book should have and more: intrigue, love, deception, mystery, unexpected twists, and an underlying truth of the horrors faced by horses.”—Shelley Sawhook, President, American Horse Defense Fund

“Relentless will take readers on a rollercoaster ride and keep you guessing on several fronts. Highly recommended and a fantastic read!”—Monica Solomon, The Romance Readers Connection, 4 ½ Stars