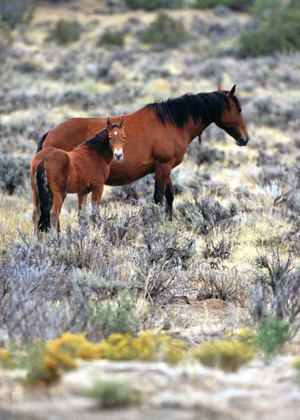 Two federal agencies are seeking bids from contractors for the long-term bait-trapping of wild horses under a new strategy.

The Bureau of Land Management and the Forest Service, which is part of the US Department of Agiculture,  said bait-trapping was being looked at to remove wild horses and burros from areas where helicopter drive trapping was not an effective method.

Bait-trapping involves capturing wild horses and burros by setting up panels and using food, water, salt or sexual attraction (a mare in heat) to lure animals into a trap.

The bids are the first of their kind, in that they involve six zones across the West, with a potential for multiple contractors simultaneously bait-trapping animals over an extended period of time.

Bait trapping is not a new method of gathering animals for the bureau; it has been implemented in areas where timeliness is not an issue, as bait trapping usually occurs over several weeks or months, and in locations where bureau personnel can easily monitor the progress from their duty locations.

However, allowing contractors to execute the bait trapping over lengthy amounts of time in a variety of locations simultaneously,  is a new strategy for the bureau’s wild horse and burro program.

The bureau’s wild horse and burro division chief Joan Guilfoyle said: “Deploying this new method of bait-trapping enhances our ability to gather animals more effectively in certain areas of the West, while minimizing the impact to the animals.”

A benefit is that it reduces the impact on the bureau’s holding facilities — instead of large horse gathers with hundreds or thousands of animals entering the facilities at one time, this type of management involves very small numbers of animals trickling into facilities over a longer period of time.

The work consists of the capture, care and transportation of wild horses and /or burros from Arizona, California, Colorado, Idaho, Montana, Nevada, New Mexico, Oregon, Utah and Wyoming.

It requires work to be accomplished in a safe and humane manner during all phases of the operation, including capture, handling and transport.

The contracts involve setting up a trap, capturing wild horses and burros and shipping them to the bureau preparation facilities. The capture, care and handling must be completed by those who are knowledgeable and experienced about the behavior and trapping of equines.

The goal is to employ contractors who live around the area where the wild horses and burros are located, so that they have short travel times from one trap area to another or to the bureau facility. There can be more than one contract per zone and one contractor can bid on more than one zone.

The BLM’s bidding requirements are posted in solicitation L12PS00229, the details of which are available at www.fedconnect.net. To obtain the solicitation: (1) click on “Search Public Opportunities”; (2) under Search Criteria, select “Reference Number”; (3) put in the solicitation number (L12PS00229); and (4) click “Search” and the solicitation information will appear. The solicitation form describes what to submit and where to send it. Applicants must be registered at www.ccr.gov to be considered for a contract award.

One thought on “Bureau looks to bait-trapping for wild horses”