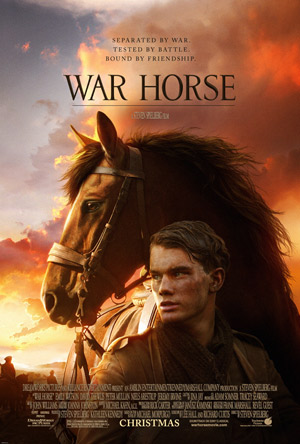 Steven Spielberg’s “War Horse” epic will be released on DVD and Blu-ray in the United States market on Tuesday.

The film adaptation of Michael Morpurgo’s 1982 children’s book of the same name will be released in three different physical packages.

The film will also be released digitally in high definition and standard definition.

The one-disc DVD comes with the bonus feature, “War Horse: The Look” and the digital versions come with “An Extra’s Point of View.”

The four-disc combo pack comes with the same extras as the two-disc combo pack, as well as “A Filmmaking Journey”, “Editing & Scoring”, “The Sounds of ‘War Horse,'” and “Through the Producer’s Lens” bonus features.

The British and Australian releases are scheduled for early May.

No release date has yet been posted for New Zealand.

“War Horse” is the fictional tale of a horse named Joey, who is sold into the service of the British Army and sees action in Europe during World War 1.

The story revolves around Joey’s World War 1 exploits and the ultimate decision by the boy who trained him, Albert, to travel to Europe to find his horse once he was old enough.

“War Horse” was nominated for six Oscars, but failed to win any.

Critics have, on the whole, been lukewarm about the tear-inducing movie.

While acknowledging the fine cinematography and John Williams’ score, many felt it was too syrupy – “a little too Disney-fied” in the words of one critic.

However, in the world of Cyberspace, “War Horse” has been doing rather better.

An analysis of data from search directory Yahoo! revealed more searches across Britain for “War Horse” than all the other eight nominees for best picture before the awards night.

It had three times as many searches as “The Artist”, which was in second spot.