British ultra-luxury car maker Rolls-Royce has hand-crafted a unique Phantom Coupé inspired by one of the 20th century’s most iconic Arabian horses.

The stallion Mirage, at one time owned by renowned Arabian breeder Lady Wentworth of Crabbet Park,  achieved worldwide fame in the 1920s and 30s as one of the strongest and fastest horses of his time.

The one-off vehicle, christened the Rolls-Royce Phantom Coupe Mirage, is now in the United Arab Emirates and is available exclusively through Abu Dhabi Motors, the sole dealer for Rolls-Royce cars in Abu Dhabi and Al Ain.

The bespoke model was conceptualised by Kadhim Al Helli, who is Rolls-Royce brand manager for Abu Dhabi Motors.

The car was  hand-crafted by specialists at the home of Rolls-Royce in Goodwood, England.

Al Helli explains: “The synergies between the Arabian horse and the Rolls-Royce brand are hard to ignore.

“Arabian Horses are one of the oldest equine breeds in existence, renowned for their refined physical attributes, fine temperament and strong bloodline; just as Rolls-Royce is synonymous with exquisite design, flawless performance and pioneering heritage.

“This car celebrates those shared qualities by embodying the spirit of a true champion, Mirage, the perfect example of a Classic Arabian Horse.”

A host of delicate touches have been added to the coupe to deliver its unique Mirage branding.

It has a matte black exterior and mugello red and black interior. The Mirage horse’s head features throughout the vehicle’s design, with a silver inlay in the passenger display panel set against the elm cluster veneer, and there is embroidery on the front and rear headrests.

The car also features a silver rope inlay in the door capping and on the front Fascia, while the glove box is embroidered with the personalised message: “Mirage motif – one of one.”

The car is expected to spark strong interest among customers in the United Arab Emirates, where the Arabian stallion holds historical and cultural significance as a symbol of strength and wealth.

The bespoke programme is a service offered to Rolls-Royce clients whereby the client may specify features of the car, in order to create their own unique model.

The stallion Mirage was purchased from the Sebaa tribe by King Faisal of Iraq early in the 20th century, and was later owned by Lady Wentworth in England and Roger Selby in the United States.

Mirage was a champion in both countries, winning the Richmond Royal Show in 1926 and becoming American Champion at the National Arabian Show in Nashville in 1934. He was used as a stud throughout the 1920s and 30s. 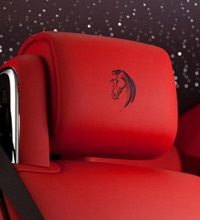