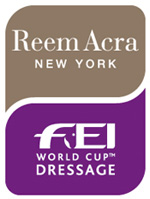 The start list for the Reem Acra FEI World Cup Dressage Final has been officially announced by the FEI, with 18 riders from 12 countries travelling to ‘s-Hertogenbosch in the Netherlands  next month.

The Dutch flag will be represented at the Brabanthallen from Thursday April 19 to Sunday April 22 by title defender and European Champion  Adelinde Cornelissen, along with Hans Peter Minderhoud.

Germany takes three riders to ’s-Hertogenbosch: former World and Olympic Champion Isabell Werth, who won the World Cup in 1992 and 2007; she is accompanied by Helen Langehanenberg and Nadine Capellmann.

Sweden has two riders in the final: Patrik Kittel and Tinne Vilhelmson-Silfven. Italy’s honours are defended by Valentina Truppa, Great Britain’s by Richard Davison and Lone Jörgensen will start for Denmark.

The USA (North American League) and Poland (Central European League) both will have two representatives: Jan Ebeling and Shawna Harding will cross the ocean for the United States, and Poland  is sending Katarzyna Milczarek Jasinka and Michal Rapcewicz.

The FEI has two extra wild cards and these went to Belgium’s Jeroen Devroe and Finland’s Mikaela Lindh. The South American League is not sending a finalist and this place will be taken by Siril Helljesen from Norway.

The starting field promises top sport with the Grand Prix on Friday, April 20 at noon and the Freestyle to Music on Saturday at 2 pm.

• Apart from the World Cup Final a Big Tour / CDI4* will offer good sport with, among others, all other Dutch top combinations. They have their Grand Prix on Thursday (10 am) and a Freestyle to Music competition on Friday (3.45  pm).

The World Cup Final for showjumping also takes place over the weekend.