Horse-keeping costs in the United States have risen well beyond the rate of inflation in the last six years, analysis by the Equine Welfare Alliance reveals.

The hyperinflation has added to the woes of horse owners still feeling the effects of the global financial crisis, which hit in 2008.

The alliance, an umbrella group for organisations that support equine welfare and the preservation of wild horses,  exposes what it says are the real reasons behind the decline of the horse industry

The alliance carried out an analysis of economic forces that have caused major shrinkage of the horse industry in recent years.

Its study, carried out by its president, John Holland, analyzed the cost of alfalfa, meadow hay, corn and gasoline, as well as the impact of the extended recession, including rising unemployment.

The report reveals that most of these factors were in the early stages of explosive increases in early 2006, but that the full impact was not felt until the crash of the financial sector brought increased unemployment in 2008.

“The uncanny convergence of all these factors can best be appreciated if we look at each of these factors in terms of its percentage increase from the base year 2000,” Holland said.

“Just before the beginning of 2006 almost all of the factors, except fuel, converged at an overall increase of about 25 per cent from the year 2000.

“This was the ‘quiet before the storm’,” Holland said. 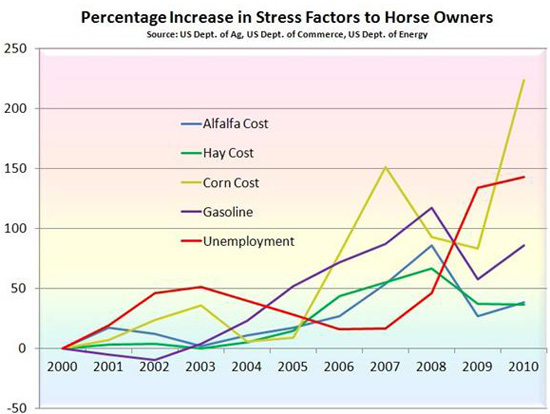 “By the time that the US slaughter plants closed in 2007, virtually all of the cost factors were starting a wild upward trajectory.

“In 2008, the recession kicked in and the rate of unemployment began to add to the pressures on horse owners.”

The accompanying graph reveals the extent of increases.

The figures reveal that, since 2000, the price of corn, used in concentrated feeds, had climbed nearly 250 per cent.

Over the same time period, alfalfa hay, meadow hay and fuel costs also rose dramatically, at a time when unemployment had climbed by about 150 per cent.

Holland said the findings explained why breed registries had seen an approximate 50 per cent reduction in foal registrations since 2007.

“While all sectors of the economy have been hammered by the economic conditions, this new study shows that the horse industry has also suffered hyper-inflation of its costs,” Holland said.

“The combination has been devastating.”

The study also goes into government policies that led to these pressures.

With no cessation in horse slaughter during this period, the impact was negligible, at best, and the downward spiral would have continued had the plants remained open, Holland said.

A Government Accountability Office (GAO) study, released in June 2011, attributed the declining prices of low-end horses largely to the closing of the US horse slaughter plants.

The conclusion was widely ridiculed because the study admitted that the increased export of horses to slaughter had meant there was no overall reduction in the number of US horses slaughtered, Holland said.

“It is now obvious that the GAO completely missed the elephant in the living room.

“They didn’t even mention the increased cost of feed and fuel, and instead focused on the cost of longer trips for kill buyers hauling horses to Canada and Mexico.”

Holland said the combination of factors had resulted in a dramatic downsizing by horse breeders and owners.

“Most tragically of all, these forces have pounded the equine rescue community which represents the last good hope for a displaced horse.

“There are those who propose to ‘restore’ the horse industry by bringing horse slaughter back to the US,” Holland said.

“Since there never was a lack of slaughter, it had nothing to do with the plight of the horse industry. Increasing slaughter is no more likely to cure the industry’s ills than the medieval practice of bleeding a patient.

“The only bright spot in all this is that the industry has already gone through a huge correction. New registrations are down about 50 per cent overall.”

Holland continued: “If it is to survive, the horse industry must understand that it faces the same issues as many other animal industries.

“Likewise, the enormous political energy being expended by the animal agriculture industry to preserve horse slaughter based on a nebulous ‘slippery slope’ argument is resulting in a complete misallocation of its political resources.

“If current trends continue, horse ownership will once again become what it was in the dark ages; the exclusive domain of the privileged class.”

The study is available for download free from here.

4 thoughts on “US horse industry suffers six years of hyperinflation”