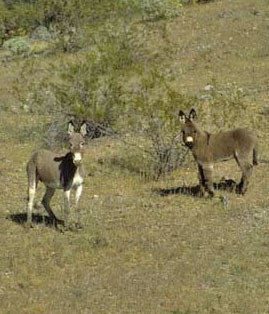 The head of the Humane Society of the United States has thanked Texas authorities for suspending the shooting of burros in Big Bend Ranch State Park while efforts to find non-lethal control measures are explored.

Society chief executive and president Wayne Pacelle, in his blog, A Humane Nation, said: “These animals are at the park through no fault of their own.

“We humans put them there, and it’s up to us to handle any conflicts that now arise in the most merciful way.

“We now have a path forward, thanks to the leadership of the Texas Parks and Wildlife Department for agreeing to look at a new way of handling the situation, and to all of you who demanded a better outcome for the burros.”

Pacelle said the department had been shooting feral burros in Big Bend Ranch State Park in an effort to reduce their numbers, as a way of reducing impact on the desert park’s water sources, archaeological sites, and native plants.

Personnel from the Texas agency have killed about 130 burros since 2007.

The society has been talking with the department and the agency has now agreed to suspend the policy while the society explores non-lethal options to manage the animals.

The first step in that process was conducting an aerial survey in spring to collect data, for which the department is offering financial support.