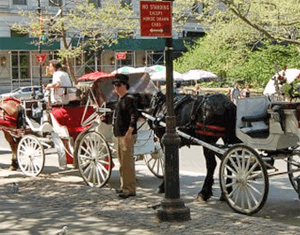 The Horse and Carriage Association of New York City is planning a gala event to raise money for the retirement facility as part of its first annual “ClipClopNYC: Weekend with the Carriages”, from March 30 to April 1.

Equestrians from a dozen states are expected in Manhattan for the event, to support and learn more about the lives of New York City’s carriage horses.

Free events include  “Brunch at the Barn”, a meet and greet brunch and stable tour with industry veterinarians, farriers, teamsters representatives and others; Central Park carriage rides; and an informational media event at the carriage line at Central Park.

The association will also officially announce its partnership with Blue Star Equiculture, of Palmer, Massachusetts, as the official retirement venue for New York’s carriage horses, and introduce to the press the association’s first equine retiree bound for Blue Star.

On Saturday evening, the carriage industry’s first gala benefit for Blue Star will take place in the Ritz Carlton Hotel on Central Park South.  All ticket proceeds from the three-hour cocktail party will go to Blue Star to support retired carriage horses.

Association president and ClipClopNYC event co-ordinator Eva Hughes said the idea came about online for an event that would bring together equestrians of all disciplines to learn about and support the carriage industry.

Local equine associations and professionals plus riding and driving clubs have been invited, including members of the New York State Horse Council.

Among those attending will be the directors and a dozen volunteers from Blue Star Equiculture.  Blue Star’s executive director and co-founder, Pamela Rickenbach, says the organization is proud to be the official retirement home for the famous Central Park carriage horses.

“The NYC carriage horses are very much loved and respected by their owners and drivers. It’s crucial for the entire horse industry that we preserve the ancient partnership between horses and humans.”

To participate in ClipClopNYC, to purchase tickets for the gala benefit for Blue Star Equiculture, or to sponsor the event, visit www.clipclopnyc.com or contact the Horse and Carriage Association of New York City at nyccarriages@gmail.com