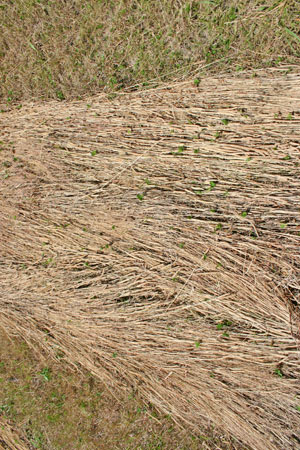 Lost hay production from the 2011 drought in Texas amounted to $US750 million, economic analysis reveals.

The drought put the squeeze on horse owners and ranchers across the state and beyond, pushing up feed prices dramatically and providing minimal winter grazing. Crop failures worsened the problems.

Total Texas agricultural losses from the 2011 drought reached a record $US7.62 billion, making it the most costly drought in history, according to updated totals by Texas AgriLife Extension Service economists.

“2011 was the driest year on record and certainly an infamous year of distinction for the state’s farmers and ranchers,” said Dr David Anderson, AgriLife Extension livestock economist.

“The $US7.62 billion mark for 2011 is more than $US3.5 billion higher than the 2006 drought loss estimates, which previously was the costliest drought on record.

“The 2011 losses also represent about 43 per cent of the average value of agricultural receipts over the last four years.”

“Texas farmers and ranchers are not strangers to drought, but the intensity of the drought, reflected in record high temperatures, record low precipitation, unprecedented winds coupled with duration – all came together to devastate production agriculture.”

Texas Agriculture Commissioner Todd Staples said: “When you are one of the biggest agricultural producing states in the nation, a monumental drought causes enormous losses.

“While the pain and damage this drought has caused cannot be overstated, our state’s farmers and ranchers are determined in their commitment and fierce in their resolve.

“We will rebuild and continue delivering the safest, most reliable and most affordable food supply in the world.”

“Even irrigated farmers experienced huge losses as water supplies that they could deliver were not adequate to produce crops under these conditions with no rain,” he said.

“The drought started in the fall of 2010, resulting in very little winter grazing. Many of our pastures and hay meadows never greened up after the winter.”

“Hay was purchased as far away as Montana, dramatically driving up the cost of supplemental feed. While much of the state began to receive some relief from this drought in late fall or early winter, most of the large areas of the plains and West Texas have yet to receive any relief.”

Through August of 2011, AgriLife Extension economists previously reported $US5.2 billion in drought losses.

Livestock losses due to the drought are estimated to be $3.23 billion.

“Losses include the increased cost of feeding livestock due to the lack of pastures and ranges, and market losses,” Anderson said.

“Market losses include the impact of fewer pounds sold per calf and the impact of relatively lower market prices due to the large number of cattle sold in a very short time period.”

On hay losses, Anderson said the lack of rain throughout the year led to the lack of hay to harvest.

“Corn stalks, grain sorghum, and wheat stubble from either failed grain crops or post-harvest residue is often baled during drought years, as was commonly done in 2011.

“The quality of these feeds is often very low, and its value is commensurate with its quality. Although, in years like this even the lowest quality feeds are used along with other supplemental feeds.”