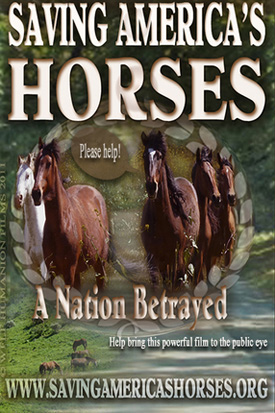 The film Saving America’s Horses has been  selected to screen at the Kansas City Film Festival as part of its Documentary Jubilee Showcase.

The Festival  is dedicated to showing independent films and to celebrating the creativity and hard work of filmmakers from around the world.

Kansas City’s premiere of Saving America’s Horses is on April 16 at 3pm.

Filmmaker Katia Louise examines the controversial issue of horse “processing” and “gathering” with first hand testimony from both sides of the fence. The landmark feature documentary film is described as“ an intelligent and hard hitting exposé that reveals how the public has been misled by government agencies and corporate interests that run over the laws that are supposed to protect the horses and the environment”.

“We are honored and thrilled for this opportunity to bring Saving America’s Horses to the great state of Missouri,” says Katia Louise. “The public deserves to know the un-whitewashed truth.”

Laura Allen, Founder of Animal Law Coalition, said: “Horse slaughter supporters are trying now to force slaughter plants onto a number of communities in the US.

“Saving America’s Horses is very powerful in making the point that despite the empty promises of investors which are typically foreign, horse slaughterhouses won’t bring jobs and economic growth or relieve the suffering of horses,” Allen said.

“This film reveals the astonishing devastation to communities that horse slaughter leaves in its wake.”