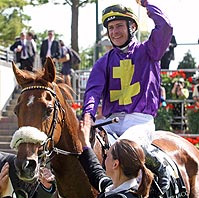 Britain’s Channel 4 has secured terrestrial rights for horse racing in the UK from 2013 to 2016, meaning it will now carry the showcase Grand National, Royal Ascot and Epsom Derby meetings.

The deal is reported to be worth about £15 million.

The key racedays had previously been the domain of the BBC, which will relinquish all of its live televised interests in racing due to budget restraints.

It is understood the BBC will focus on retaining events including the Six Nations rugby and Formula One racing, which they share with Sky.

Channel 4 struck the deal with Racecourse Media Group, in association with Jockey Club Racecourses, Ascot Racecourse and other independent racecourses.

Channel 4 said it would now exclusively broadcast all the crown jewels of the racing calendar from 2013 – Aintree’s three-day Grand National meeting, the Derby Festival from Epsom Downs, Royal Ascot and the  British Champions Day from Ascot.

They will sit alongside its long-established coverage of Cheltenham Festival, Newbury, York, Chester, Glorious Goodwood racecourses and the Flat Season British Champions Series.

The four-year partnership will deliver about 90 days a year of terrestrial coverage of horseracing on the channel.

Channel 4 said it would seek to introduce new innovations and enhancements to its racing coverage.

Jockey Club group chief executive Simon Bazalgette said: “Channel 4 has been a tremendous partner for British racing to date and this new deal is a huge boost for our sport.

“I believe the vision and nature of this new arrangement will help to make a step-change in the way we broadcast the sport. Channel 4 now has the platform to enhance the promotion of our sport all-year-round.”

“The sport is in a great place at the moment and the editorial appeal and popularity of both codes has been apparent through what has been a competitive tender process.

“A one-channel scenario will enable us to tell our stories clearly and consistently, and obviously Royal Ascot is fundamental to that. I would personally like to thank BBC Television for everything they have done for racing and we look forward to continuing to work with their other platforms.”

The new arrangement will see all 35 races in the QIPCO British Champions Series of premier Flat racing broadcast on Channel 4.