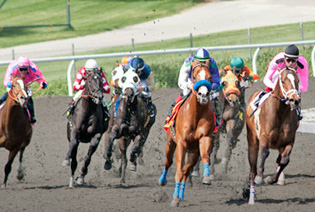 Several television critics have not entirely bought into HBO’s line that the cancellation of the racing drama “Luck” was solely down to the deaths of three horses.

HBO announced last week that the show was being canned, two days after the suspension of filming involving horses after a third horse involved in the production died.

Two horses died during the first season – including one in the primer. The death of a third early in the filming of season two proved too much for HBO.

“It is with heartbreak that executive producers David Milch and Michael Mann, together with HBO, have decided to cease all future production on the series ‘Luck’,” HBO said in a statement.

It continued: “While we maintained the highest safety standards possible, accidents unfortunately happen and it is impossible to guarantee they won’t in the future. Accordingly, we have reached this difficult decision.

However, the colourful show, depicting the underbelly of the racing world and boasting a high-octane cast including Dustin Hoffman and Nick Nolte, was hardly a ratings firecracker.

It was warmly welcomed by television critics, but the viewers simply had not stacked up as they have with HBO successes.

HBO showed faith by renewing it for a second season, but it always knew that the costs of producing a show of this nature ultimately needed to translate into ratings success to remain viable.

Luck’s viewing peak was just over 1 million, with mosts shows for the Sunday night time slot reportedly around the 500,000 mark.

While numbers would have been boosted by those who recorded it or watched mid-week repeats, it was hardly a home-run winner.

By comparison, HBO’s “The Sopranos” was regularly able to lure 10 million viewers.

Some have suggested the use of too much horse-racing terminology may have been a step too far for some potential viewers.

HBO, as a pay channel, isn’t slavishly tied to ratings fortunes in the same way as free-to-air broadcasters.

For this reason, it can afford to provide some shows that would be unlikely to get out of the starting gates in the free-to-air environment, such as its “Carnivale”.

It has shown in the past a patience to allow shows to bed in, but they have been unlikely to survive beyond a second season unless commercial realities dictate.

Luck could well have been staring down that fate.

Several television critics have suggested that while the deaths of three horses undoubtedly featured in the decision, the fact the show was struggling for ratings needed to make it a  success would have made the decision a whole lot easier.