A specialist team of 20 was assembled for Fenton the zebra’s surgery on his jaw cancer, but the colourful life of the beloved animal ended on the operating table.

The Living Desert in California was this week mourning the death of a zebra it described as the nosiest – and perhaps noisiest – in the park.

Fenton, 22, died on Wednesday from heart failure while undergoing surgery.

One of the the most popular animals at the zoo, Fenton was diagnosed with cancer of the lower jaw just two weeks ago.

Fenton was an endangered Grevy’s Zebra, born in 1989 at the Gladys Porter Zoo in  Brownsville, Texas.

The zoo said Fenton had a large fan base of visitors because of his unique personality.

“He thrived on attention, and was a very charismatic zebra,” a zoo representative said.

“Known as a big ham,  Fenton was the nosiest  – and perhaps noisiest – animal in the park. He loved to smell the animal keepers’ shoes and took great pleasure in having air blown up his nose.

“His regular and loud braying was a signature feature of a visit to The Living Desert.”

Following the diagnosis of cancer, surgery was made a priority, and a team of experts was assembled from all over Southern California.

The team of 20, including veterinarians, equine specialists, dentists, veterinary technicians and support staff, worked tirelessly to remove the cancer from his lower jaw, the zoo said.

However, about an hour into the surgery, Fenton died due to heart failure.

One of the veterinarians taking part in the surgery was Fenton’s namesake. Dr Kevin Fenton, who had forged a special history with the young zebra when, in the early 90s, he was called in to stitch a cut on the colt.

As an equine veterinarian, it was the first time he had ever worked on a zebra.

After seeing the rapport between the animal and doctor, The Living Desert staff decided to name the zebra “Fenton” after the doctor who cared so well for him.

Dr Fenton, of All Creatures Animal Hospital, said: “Fenton was a noble and proud animal and was here to cut us humans some slack.

“He allowed us into his space. He gave us that passage, which is an unusual gift for zebras to give. Personally, my heart is heavy and I will miss my striped friend.”

“Sadly, having reached an age where mortality rates in zebras spike and given his deteriorating health, there wasn’t anything more that could have been done.”

Fenton’s body was transported to the California Animal Health and Food Safety Laboratory in San Bernardino for a complete necropsy. 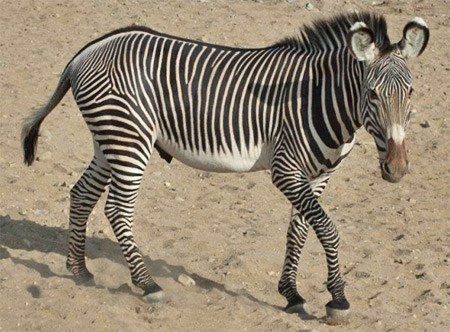