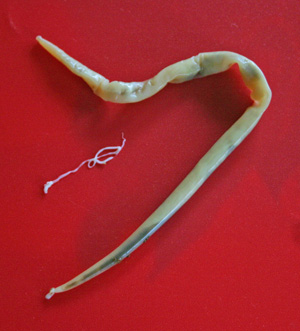 Q. While mucking out the stable of my four month old weanling filly, I found this worm on the floor. She has never been dewormed. What is it?

Up until weaning she was on pasture with her mother, but has been stabled during the weaning process.

A: Hi Dawn. Thank you for providing some very professional pictures. The worm in the picture is the large roundworm Parascaris equorum. No other equine roundworm reaches this size, so identification is easy.

It primarily infects foals and yearlings, while it can only occasionally be found in adult horses. At the age of four months, your filly is highly likely to harbour these worms. If you haven’t yet dewormed her, she is likely to harbour more worms in the intestines.

Most foals tolerate the large roundworm up to a certain level, but this parasite is considered the most important parasite in this age group. After being exposed to the roundworms during the first year of life, the yearlings soon develop a strong immunity to the parasites.

Roundworm larvae migrate through the liver and lungs, and in high numbers you may see signs of airway inflammation. After making it back to the small intestine, they grow in size and the female worms start shedding eggs in the feces.

Roundworms are reported to cause stunted growth and ill-thrift in the foals. Foals around weaning age are at risk of developing small intestinal impactions with these worms, which is a critical condition that may require surgery.

It has been shown that foals with large worm burdens are particularly at risk of developing these impactions if they are treated with a dewormer with a paralytic mode of action, such as ivermectin or pyrantel. The risk of impaction appears to be less pronounced with benzimidazole-type drugs. You may consider consulting your veterinarian for advice regarding choice of dewormer which is really critical at this age.

The most important information you give above, is that your filly is in good health. That is always the bottom line. Horses can maintain perfect health, even in the presence of several parasite types. However, the time around and after weaning is always somewhat stressful to the foal, and I recommend deworming at this time.

Please bear in mind that roundworms have been found to be capable of developing resistance to various dewormers, and it is important to routinely check the efficacy of the dewormers you are using. Talk to your veterinarian about running some fecal egg count reduction tests on a yearly basis.

Dr Martin Nielsen is a professor in equine parasitology at the Maxwell H. Gluck Equine Research Center at the University of Kentucky. » Read Martin's profile

4 thoughts on “What is this worm?”