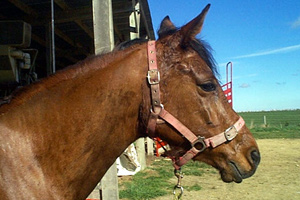 Could head-shaking in horses be associated with pain from similar syndromes to those found in humans?

Professor Derek Knottenbelt provided his hypothesis around headshaking to those attending this month’s National Equine Forum in Britain. He also gave a presentation on sarcoids.

The forum was attended by more than 200 of Britain’s most influential members of the equestrian industry, including forum president Princess Anne, leading equine vets, international riders and trainers, and equestrian trade business leaders.

Knottenbelt explained that a high proportion of headshakers showed the worst signs during exercise, but many had very variable symptoms.

He described how nostril-clamping had recently been identified in some horses, showing affected horses attempting to close each nostril in turn as if trying to prevent the intake and movement of air and possible associated pain.

He went on to suggest that the condition is very similar in nature to the syndromes of facial pain encountered in the human in multiple sclerosis, post-herpetic neuralgia, trigeminal neuralgia and cluster headache syndromes.

In all these conditions, uncontrollable pain is the cardinal feature.

“It is now accepted that it is not a vice and owners now expect a more rational and less patronising investigation and assessment of prognosis.”

Therapy for headshakers is currently limited to the use of drugs and/or management changes, including the use of masks and contact lenses.

Expectations for cures are high, but realistically not achievable at present, he said.

He closed by emphasising that headshaking is a serious neurological condition that has a significant implication for the welfare of the horse, warranting a thorough clinical investigation.

Knottenbelt also gave a practical update on sarcoids. He emphasised that the sarcoid should be regarded as a form of skin cancer and not a wart.

He explained that researchers are still some way off finding a definitive cause for the disease, but what is known is that horses of all ages can be affected and that it has a genetic basis.

It is also clear that the fewer lesions present at any one time, the fewer the horse will get, and that this may link to the feeding habits of flies. There is also some suggestion of an increased prevalence in thin-skinned horses.

Prognosis is guarded and early treatment is important, as success is more likely if the lesions are small and the horse is under four or five years old.

Knottenbelt said the correct choice of treatment was critical, taking into account each individual lesion.

“Resorting to homeopathic rubbish or other witch-doctoring is not what cancer deserves. We are in desperate need of more effective treatments and some form of prophylaxis if we are to rid the horse of this distressing and expensive disease,” he said.

Lisa Randle, presenter of the British Horse Society Thesis of the Year, kept to the theme of equine healthcare with her paper entitled “Equine obesity – helping horse owners to help themselves”.

She raised the serious problem of owner perception of equine obesity, saying that her own research indicated that owners appeared to be accepting the obese phenotype as a representative of normality.

Unless perceptions could be altered, then owner behaviour would continue to perpetuate the problem of between 30 per cent and 54 per cent of horses and ponies in Britain being either overweight or obese.

Randle suggested that a potential solution could be the introduction of “well horse” clinics.

“Equine vets, nutritionists, physiotherapists and dentists could work together to educate and motivate horse owners in cases where action is required. Owners need the support of equine professionals to healthily manage the horses and ponies in their care.”

» Article: Non-surgical management of sarcoids in the horse