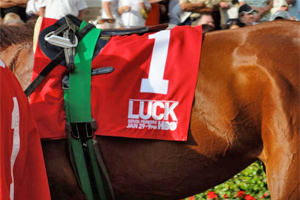 Just two days after suspending filming of the racing drama “Luck” following the death of a third horse in connection with the show, HBO has pulled the plug on the entire production.

“It is with heartbreak that executive producers David Milch and Michael Mann together with HBO have decided to cease all future production on the series ‘Luck’,” HBO said in a statement.

“Safety is always of paramount concern. We maintained the highest safety standards throughout production, higher in fact than any protocols existing in horser acing anywhere with many fewer incidents than occur in racing or than befall horses normally in barns at night or pastures.

“While we maintained the highest safety standards possible, accidents unfortunately happen and it is impossible to guarantee they won’t in the future. Accordingly, we have reached this difficult decision.

“We are immensely proud of this series, the writing, the acting, the filmmaking, the celebration of the culture of horses, and everyone involved in its creation.”

Michael Mann and David Milch said: “The two of us loved this series, loved the cast, crew and writers. This has been a tremendous collaboration and one that we plan to continue in the future.” In the latest horse death, a mare reared up and fell backwards while being walked back to her barn by a groom at Santa Anita Racetrack, in California, on Tuesday.

The American Humane Association had been monitoring horse welfare on set, and HBO then agreed to suspend filming of horses pending an inquiry into the circumstances around the accident.

The AHA said the horse had just been inspected and passed by a licensed veterinarian conducting soundness checks before filming.

HBO provided a statement from California Horse Racing Board (CHRB) official veterinarian Dr Gary Beck, who said: “I had just examined the horse as part of our routine health and safety procedures prior to work that would be done later on the track.

“The horse was on her way back to the stall when she reared, flipped over backwards, and struck her head on the ground.

“Fortunately, attending veterinarian Dr Heidi Agnic was there to administer immediate aid to the injured horse and determined that humane euthanasia was appropriate.”

The board’s equine medical director, Dr Rick Arthur, commented: “As with all fatalities within CHRB racing enclosures, a necropsy will be conducted. Unfortunately, we see several of these injuries in the stable area every year. They are more common than people realize.”

Two horses died during the filming of the first series of “Luck” – one in the pilot and another in episode seven.

As with the second series, the animal sequences in the acclaimed series, starring Dustin Hoffman and Nick Nolte, were filmed under the supervision of the American Humane Association.

“The two racehorses stumbled and fell during short racing sequences,” the association said.

“The horses were checked immediately afterwards by the onsite veterinarians and in each case a severe fracture deemed the condition inoperable. The decision was that the most humane course of action was euthanasia.”

The association said that following the second incident, it insisted production be suspended and imposed additional stringent soundness protocols.

“These included, but were not limited to, daily training and care records, microchips in all of the horses, hiring an additional veterinarian to do the comprehensive soundness checks at the top of the day, and radiographs of the legs of all horses being considered for use on the show.

“We insisted that these protocols be in place before any filming could resume.

“HBO agreed to all our requests and worked collaboratively regarding these many additional safety guidelines and precautions, and resumed filming once all of the horses in the show stable were radiographed and those deemed at risk were pulled.”