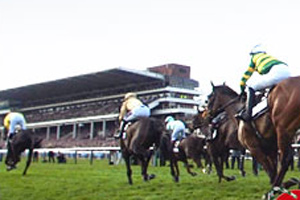 Scotsirish, 11, and Garde Champetre, 13, were both injured during the the 3-mile 7-furlong cross-country handicap chase. Officials said both sustained their injuries when on the flat between fences. Scotsirish fractured a hind cannon bone near a fence described as similar to Aintree’s Canal Turn, while Garde Champetre fractured a foreleg. There were 16 runners in the race.

Educated Evans, a seven-year-old, reportedly broke a hind leg at the second last fence in the final race of the day, a two-and-a-half mile novice chase which had 20 starters.

A review of the incidents would be undertaken by Cheltenham officials. “It’s obviously sad when these things happen, but we have a very good record here for horse welfare,” said clerk of the course Simon Claisse.

“That race [the cross-country chase] has a very good record. We’ve had 375 runners in it since 2000, and only previously one fatality,” Claisse said.

Advocacy group Animal Aid said the festival puts horses “under enormous pressure, due to the big, noisy crowds and hyped-up frenetic atmosphere. In addition, many of the races at both meetings feature a large number of horses, making it difficult for them to judge their jumps.”

Animal Aid Horse Racing Consultant Dene Stansall said: “The race in which Scotsirish and Garde Champetre were killed should never have taken place, given that it was run on dangerously firm ground. The layout of the cross-country course does not allow the operators to soften the going by watering what was officially termed ‘good to firm’ ground. Rather than take the precautionary step of calling off the race, officials risked the lives of the horses, and two paid the ultimate price. Novice horse Educated Evans was unable to survive in an extremely crowded race that tested his ability to breaking point.”

However, a British Horseracing Authority spokesman said the course had been inspected twice before the meeting, and the ground was considered fit for racing.

Animal Aid said more horses had been killed at Cheltenham Racecourse than at any other in the country over the past five years. It said protestors will be on the course today.

“What kind of so-called sporting event is it that kills three horses in a single day? This is an industry that doesn’t stop insisting on how much it cherishes the horses upon which all its glory and riches depend. What we have seen today, in response to the tragedy of these deaths, is rank hypocrisy and callousness.”

Jumps racing in the news