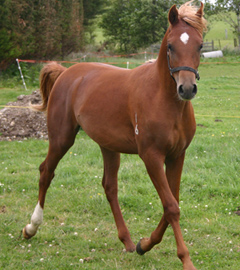 Does your horse have no trouble remembering where its salt lick is in its paddock?

United States researchers believe salt may be “nature’s antidepressant” and many animals not only have taste mechaniams to detect salt, but brains wired to remember salt sources – even the location of a salt lick in a paddock.

University of Iowa psychologist Kim Johnson and his colleagues have discovered one potential reason why humans crave it: it might put us in a better mood.

They found that when rats are deficient in sodium chloride, common table salt, they shy away from activities they normally enjoy, like drinking a sugary substance or pressing a bar that stimulates a pleasant sensation in their brains.

“Things that normally would be pleasurable for rats didn’t elicit the same degree of relish, which leads us to believe that a salt deficit and the craving associated with it can induce one of the key symptoms associated with depression,” Johnson said.

The researchers can’t say it is full-blown depression because several criteria factor into such a diagnosis, but a loss of pleasure in normally pleasing activities is one of the most important features of psychological depression.

And, the idea that salt is a natural mood-elevating substance could help explain why we’re so tempted to over-ingest it, even though it’s known to contribute to high blood pressure, heart disease and other health problems.

Evolution might have played an important part in the hankering for salt. Humans, like other animals, evolved from creatures that lived in salty ocean water.

Once on land, bodies continued to need sodium and chloride because minerals play key roles in allowing fluids to pass in and out of cells, and in helping nerve cells transfer information throughout the brain and body.

But as man evolved in the hot climate of Africa, perspiration robbed the body of sodium. Salt was scarce because our early ancestors ate a vegetable-rich diet and lived far from the ocean.

“Most of our biological systems require sodium to function properly, but as a species that didn’t have ready access to it, our kidneys evolved to become salt misers,” Johnson said.

Behavior also came to play a key role in making sure we have enough salt on board.

Animals like us come equipped with a taste system designed to detect salt and a brain that remembers the location of salt sources, such as salt licks in pasture, they said. A pleasure mechanism in the brain is activated when salt is consumed.

So the body needs salt and knows how to find it and how to conserve it. But today scientists are finding evidence that it’s an abused, addictive substance – almost like a drug.

One sign of addiction is using a substance even when it’s known to be harmful. Many people are told to reduce sodium due to health concerns, but they have trouble doing so because they like the taste and find low-sodium foods bland.

Another strong aspect of addiction is the development of intense cravings when drugs are withheld. Experiments by Johnson and colleagues indicate similar changes in brain activity whether rats are exposed to drugs or salt deficiency.

“This suggests that salt need and cravings may be linked to the same brain pathways as those related to drug addiction and abuse,” Johnson said.

Past research has shown that the worldwide average for salt intake per individual is about 10 grams per day, which is greater than the US Food and Drug Administration recommended intake by about 4 grams, and may exceed what the body actually needs by more than 8 grams.

Johnson published a review of the findings in the July issue of the journal, Physiology & Behaviour, with Michael Morris and Elisa Na, both University of Iowa graduate students.

In addition to reporting their own findings, the authors reviewed others’ research on the reasons behind salt appetite.

High salt levels are contained in everything from pancakes to pasta these days, it in the past it has been hard to come by.

Salt consumption and its price skyrocketed around 2000 BC when it was discovered as a food preservative.

Roman soldiers were paid in salt; the word salary is derived from the Latin for salt. Even when mechanical refrigeration lessened the need for salt in the 19th century, consumption continued in excess because people liked the taste and it had become fairly inexpensive.

Today, 77 percent of our salt intake comes from processed and restaurant foods, like frozen dinners and fast food.