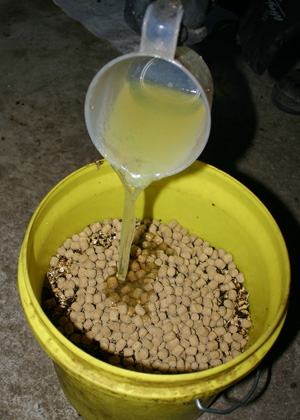 Q: I have a horse that has come from Germany. She spent the first three months at a friends in stables. Upon her arrival at my property and recieving grass she got staggers severly, unco, spooky etc …

Was treated with mycosorb which  improved her a lot but she still has over reactions that are a little dangerous, that she never had before. Have tried everything and talked to herbalists. One thing I am a little unsure of is hay, if she is that susceptible will that also affect her and or meadow chaff? Hope you can help me I am at my wits end somewhat.

She is entirely hard fed and hay, getting meadow chaff, eezy beet a small amount of top line and every magnesium, toxin binder you can think of.

Timeline: Arrived from Germany January 1, 2011, stabled and different hay for three months no over reactions to anything road rides by self, all good, is a highly strung horse but brave. End of March moved, nice lush rye grass. Week or  two later  became spooky, timid, clingy, then over reacting – example tied up loud noise pulled back and ran, then seems to want to stop but freaks out at lead rope as if it is a snake. Then loss of co-ordination, spooked and fell, couldn’t do basic gaits. Realised what was going on (yes slow I know).  Gave equiguard, improved within days, so by May I thought i had the problem under control – still riding etc. In hindsight she was still spookier and not as brave. In June she had a couple of over reactions that  I saw, both in the paddock while eating then seems to think hay in her mouth dangling and touching her face is a snake , totally freaks in paddock, ran thru multiple fences. I promptly changed to  mycosorb double dosage, and magnesium oxide. She also gets fortivite, vegetable oil and salts. Again I thought I had it fairly under control. She then bucked someone off during an over reaction … she was a little hyped at the time. I changed to equiguard plus, and added compete to her diet. I kept riding, another reaction has been on lunge almost like sudden panic scared of her tail, run and buck  occassional reactions to eating hay or picked grass.

She is now in foal and turned out as I am waiting to also eliminate pain issue from her falls. She is now getting nubind as her toxin binder and today I also purchasd some herbal detox. She has been getting the nubind for a week and been in as grazed out a dirt grass paddock as I could get it. Advice differs on this, too. She seems calmer but is two weeks in foal and have seen one over reaction in paddock a few days ago…. She has also been getting relax for a week. I have regrassed with  horse mix, fescue, browntop, cofoot … but this won’t be ready for a while.

You probably already know this, but just in case …

The toxin lolitrem B is a BK-channel inhibitor – it interferes with movement of Calcium & Potassium ions that make electrical signals.

A group at Palmerston have begun searching for BK-Channel activator drugs, but I think your horse will be old by the time a safe one is discovered.

Most horses don’t like the taste of fish oil, but if it is flavored like Mitavite Performa 3 oil, and you start gradually, you will be able to administer enough.

If you can’t import the Mitavite Oil, try salmon oil with either garlic or caramel flavour.

Start with 20 ml per day and increase it by 10 ml per day until you get up to 300 ml per day. If the manure becomes too soft, you will have to stop increasing it for a few days.

Good luck. She will get better if she doesn’t damage herself first. It may take 3 months.

Q: Thanks, no, had not been informed of the use of omega 3 oil, yay fingers crossed it helps before she hurts herself.

Should I stop giving her vegetable oil?

A:  yes, remove the vegetable oil – it doesn’t contain any DHA, and we want her to get as much as possible of that before she gets oil overload.

2 thoughts on “Staggers in imported warmblood”