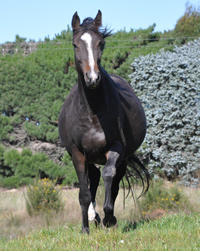 Thoroughbred horses appear to be more severely affected by the disease than other breeds. Because animals may be asymptomatic, the disease is difficult to detect and control. There is no evidence that CEM affects people.

CEM is a serious disease because it is highly contagious. When coupled with the fact that mares can be bred only during certain seasons, CEM can have a devastating effect on equine reproductive efficiency. Should CEM become established in the United States, the horse industry would suffer great economic losses.

Because of the insidious nature of the disease, it is difficult to determine its origin or how widely it is distributed throughout the world. Countries known to be affected with CEM include Austria, Belgium, Bosnia-Herzegovina, Croatia, the Czech Republic, Denmark, Finland, France, Germany, Great Britain, Greece, Guinea-Bissau, Ireland, Italy, Japan, Luxembourg, the former Yugoslavian republic of Macedonia, Montenegro, the Netherlands, Norway, Serbia, the Slovak Republic, Slovenia, Sweden, and Switzerland.

The first cases of CEM in the United States were diagnosed on March 9, 1978, on thoroughbred farms in central Kentucky. In April of the following year, an outbreak occurred in Missouri. The disease was rapidly eradicated from both States and has not subsequently been found in the U.S. horse population.

Undetected carrier mares and stallions are the source of infection for acute outbreaks of the disease. During the breeding season, a carrier stallion may infect several mares before the disease is suspected or diagnosed.

Initial exposure to the disease usually results in infertility. An infected mare may fail to conceive (revealed by an early return to estrus after breeding) or she may spontaneously abort. Abortions related to CEM are rare, however. Stallions exhibit no clinical signs but can carry the CEM bacteria on their external genitalia for years.

There are three general degrees of infection in mares.

Two of the most common genital infections in mares are caused by Klebsiella and Pseudomonas spp. bacteria. Differentiating these infections from CEM cannot be reliably done except by laboratory isolation of T. equigenitalis.

Swabs for bacteriologic cultures from mares are taken from the cervix or endometrium of the uterus during estrus, clitoral fossa, and clitoral sinuses. Swabs from stallions should be taken from the penile sheath, fossa glandis, and urethral sinus. Bacterial samples must be delivered in Aimes transport medium (with charcoal) under refrigeration (4 to 6°C) to an approved laboratory within 48 hours.

In mares, various serologic blood tests may be used to detect antibodies to the CEM bacteria. In stallions, detectable antibodies do not develop.

This article was first published on Horsetalk.co.nz on April 13, 2007.