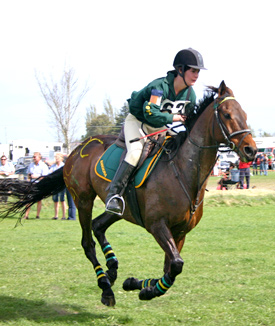 Sweet feed may make coats gleam and provide an energy boost, but there may be training drawnbacks, researchers suggest.

Montana State University researchers found that young horses may be easier to train if they temporarily lay off sweet feed.

Animal nutritionist Jan Bowman found that the extra energy provided by sweet feed during the early stages of training made the horses in a study more disobedient and fearful than horses that ate only hay.

The grain-eaters spent more time resisting the saddle. They startled easier and bucked and ran more during training.

Early training, which usually lasts about 30 days, gives young horses the foundation they need for more advanced training, Bowman said. They learn to move sideways on command, for example, and learn how to move their front or hind feet in any direction.

Results suggested trainers under time constraints could increase their training effectiveness during the early stages of training by not feeding excess dietary energy, according to horse trainer Wade Black.

It was Black, one of Bowman’s graduate students, who came up with the idea for the study when he was an undergraduate in her equine nutrition class.

The study involved 12 closely related quarter horses that came from one Idaho ranch.

Black trained the horses for three weeks, five days a week at the university.

Half the horses ate only hay. The hay was a mixture of grass and lucerne. The other horses ate five pounds of sweet grain a day in addition to the hay. Both groups ate as much hay and drank as much water as they wanted.

Each horse wore a pedometer adjusted to its stride and attached with an Ace bandage to its left front leg above the knee.

Each horse also had a combination wristwatch-heart monitor hanging from its saddle. The watch displayed minimum, maximum and mean heart rates detected by an electrode belt.

Black trained the animals for 30-40 minutes a day without knowing which animal had eaten grain and which one hadn’t.

She and Black then recorded heart rates and the number of steps the horses took during training. They scored behaviours such as obedience, get-up-and-go and separation anxiety.

Horses that ate both grain and hay became more upset when they were separated from the herd. They whinnied more and were livelier and less submissive than the horses that ate only hay.

The study doesn’t mean that trainers should keep grain away from horses forever, Bowman said. They might consider withholding it just during the early weeks of training.

“We don’t want to give the impression that you should starve them in order to enhance their good behaviour,” Bowman said. “That’s not the point of it.”

Wade noted, “Horses being ridden by less experienced riders need to be calm and easy to handle – characteristics that may be enhanced by more effective early training.”

Bowman noted that all of the horses in the study gained weight during the study. It didn’t matter if they ate hay alone or hay with grain.