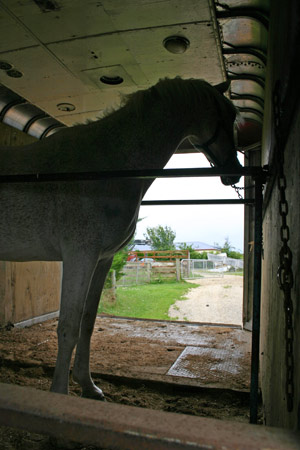 A study that involved float training of horses has shown the benefits of positive reinforcement.

Their research has been reported in the Journal of Veterinary Behavior. In positive reinforcement, the desired behaviour is encouraged by giving a reward as a consequence of the behaviour.

A particular behaviour can also be encouraged by removing an unpleasant stimulus. This is known as negative reinforcement. In this case, the reward is the stopping of a negative stimulus once the correct behavioural response is achieved.

Negative reinforcement is not the same as punishment, in which an adverse stimulus is given in response to the undesired behaviour. This results in the behaviour becoming weaker or stopping altogether.

Twelve horses took part in the study. All had previous bad experiences with trailer loading and their owners were unable to load them.

Horses were randomly separated into two groups. The positive reinforcement group received clicker training and were trained to follow a target (a yellow ball on a stick) into the trailer. For the negative-reinforcement method, an adverse stimulus was applied by pulling on the lead rope, or tapping the hindquarters with a whip. This adverse stimulus was stopped as soon as the horse obeyed.

Throughout the training sessions, the research team recorded heart rate, and noted signs of behaviour and discomfort.

However, it was not always successful. One horse was not interested in the treats provided as rewards and so did not complete the training within the maximum 15 sessions.

The negative-reinforcement group showed significantly more signs of discomfort, but there was no significant difference in heart rates between the groups.