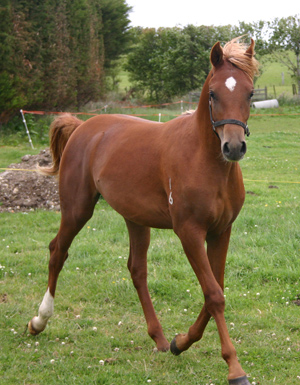 Recovery from a “twisted” small intestine following colic surgery in horses is far better than previously reported, researchers have found.

It was one of several key findings from University of Florida veterinarians presented to the recent Colic Symposium, held in Indianapolis.

Colic is the number one cause of premature death in horses. The name refers to diseases that cause abdominal pain, usually originating from an obstruction in the gastrointestinal tract.

The sooner colic is treated, either medically or surgically by a veterinarian, the better the chance of survival.

One study by Freeman and his colleagues focused on survival after small intestinal surgery, which can be the most challenging type of colic surgery.

The researchers concluded that recovery from a “twisted” small intestine following surgery is far better than previously reported.

“This is significant, because this report shows a favorable long-term survival rate after one of the most difficult types of colic surgery, and that this surgery can allow horses to live a full and normal life,” Freeman said.

Freeman also reported that long-term recovery after small intestinal surgery for strangulating diseases is affected by the type of disease that causes the problem to occur.

“This type of information allows us to deliver more accurate prognoses, and ultimately to devise treatment plans likely to have better outcomes,” Freeman said.

Two studies looked at the effects of various drugs used for pain management in healing of the large intestine after ischemia and in critically ill, hospitalised horses.

Researchers concluded that flunixin meglumine (known as Banamine), a non-steroidal anti-inflammatory medication that helps with pain and inflammation, can still help manage pain without inhibiting healing of the large intestine.

This finding is important because it is the opposite of what has been found in similar studies in the small intestine.

Another study examined the effects of two analgesics commonly used to treat horses with colic, N-butylscopolammonium bromide (known as Buscopan) and xylazine (known as Rompum), and found that both medications can have effects on heart rate, blood pressure, and intestinal motility and these effects should be taken into consideration when evaluating and treating horses with colic.

In another study, the scientists also found that ketamine, a drug used to treat severe pain in horses, slows movement of a test marker through the gut. This knowledge enables improved monitoring and treatment.

In a study looking at the relationship between salmonella infection and colic, researchers found abnormalities in blood values that help predict which horses are infected with these bacteria. This information helps veterinarians initiate appropriate treatment and take necessary precautions to prevent transmission to other animals.

Previously, a high red blood cell count was primarily linked to liver cancer, but the study demonstrated that this finding can occur with many other types of liver disease as well.

The symposium is held once every three years to bring together leading veterinary researchers, practitioners, residents and graduate students from around the world to share knowledge about equine colic.