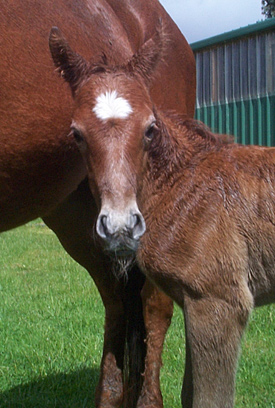 Are foals short-changed by their mothers if they become become pregnant again shortly after giving birth?

Researchers from the Czech Republic expected to find increased mother-offspring conflict where mares were pregnant, given that the mothers had an investment in not only a foal, but also a foetus.

However, researchers from the Institute of Animal Science and Charles University, in Prague, found the opposite was the case.

In fact, there was decreased mother-offspring conflict in pregant mares during the first two trimesters of pregnancy than between foals and mares where the mother was not pregnant.

“To our knowledge, this is the first study showing a lower mother-offspring conflict in pregnant than in non-pregnant lactating females, while expecting just the opposite,” the researchers wrote in the open access journal, PLoS ONE.

“Our results suggest that pregnant mares cope with parallel investment into a nursed foal and a foetus through enhancing nursing behaviour in early stages of pregnancy before the initially low requirements of the foetus increase.”

They pregant mares were, the authors noted, effectively compensating suckling foals in the first few months of life, given the prospect of an early weaning due to pregnancy.

They expected a similar scenario not only in free-living populations of equids, but also in other ungulate species with dual maternal investment, such as cattle, buffalo or goats.

“Our results suggest that pregnant mares cope with parallel investment into a nursed foal and a foetus through enhancing nursing behaviour in early stages of pregnancy before the initially low requirements of the foetus increase,” wrote Jitka Bartošová, Martina Komárková, Jana Dubcová, Luděk Bartoš and Jan Pluháček.

“This is most likely because they expect increasing trade-off between investment in a nursed foal and a growing foetus later in pregnancy, when demands of their foetus increase.

“Low initial demands of a foetus increase from mid-gestation and most of the foetal growth during the last trimester of pregnancy; pregnancy in horses normally ranges between 315 to 365 days, with the average being about 340 days.

“This increase seems to be well reflected by equid mares who wean their foals earlier than barren ones and time the weaning often just around the forthcoming of the last trimester of pregnancy.”

Pregnant mares could presumably start altering their maternal behaviour towards a nursed foal early after conception, as the recognition of pregnancy by the mare should occur on a physiological basis between day 7 and day 17, they noted.

Thus pregnant mares may, through more intensive maternal care – less mother-offspring conflict – during early stages of lactation, compensate their nursed foals for later decrease in investment due to increasing demands of the foetus.

Barren mares, on the other hand, are not under pressure of dual investment and wean their foals usually later so they can spread their maternal investment over a longer period of lactation.

The authors said the weaning process could not be investigated as all foals in the study were artificially weaned before they reached seven months of age.

However, as milk production declines considerably by six months of lactation, the research covered the period of most intensive milk provision, they said.

The studied animals were in eight groups of loose-housed lactating mares with foals at the national stud farm, Kladruby nad Labem, in the Czech Republic.

The groups of mares and foals were observed from their deliveries to abrupt weaning (ranging from four to seven months of age).

Each of the foals was observed for at least 127 days and for no more than 210 days, with the number of suckling events and their duration noted. The researchers also noted whether the mare or foal ended each suckling event.

With 516 hours of observation of 79 mare-foal pairs, the researchers recorded 10,848 suckling solicitations, from which 10,607 resulted in a suckling bout.

The mothers terminated 14.96 per cent of suckling bouts. Suckling duration ranged from 5 to 198 seconds.

Suckling sessions terminated by the mother were considerably shorter than those the foal terminated itself.