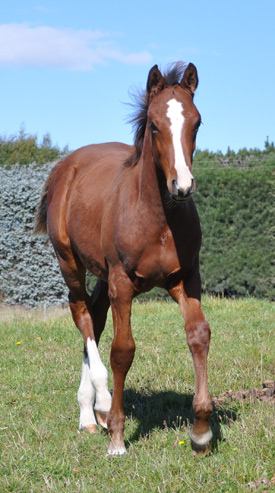 A major switch in intestinal bacteria within the first two weeks of life appears to be directly responsible for diarrhoea in many foals, fresh research suggests.

The researchers at the University of Vienna, lead by Christine Aurich, found that the non-infectious diarrhoea may not require any specific treatment.

The scientists, whose findings are published in the current issue of the journal Veterinary Microbiology, said many young animals developed diarrhoea shortly after birth.

Instead, it has been proposed that foals “automatically” develop diarrhoea around the time their mothers’ oestrous cycle restarts after giving birth.

This theory has now been refuted by the researchers.

Their findings show that the intestinal flora of foals undergoes a major switch within the first two weeks of life. The change appears to be directly responsible for diarrhoea.

Horse-breeders realise that most new-born foals suffer from diarrhoea.

Many methods have been suggested to avoid the problem, including supplementing the mothers’ diets with beta-carotene (ß-carotene), which is known to be helpful in preventing diarrhoea in young calves.

However, Juliane Kuhl, a member of Aurich’s research team, has shown that the supplement has no real effect on the incidence of diarrhoea in foals.

Kuhl, Aurich and their collaborators set about finding out the cause of the diarrhoea and how it could be treated.

They examined the bacteria in the faeces of foals and their mothers, as well as measuring the levels of antibodies (gamma-globulins) in the animals’ blood.

Foals are born with low concentrations of antibodies – effectively without functional immune systems. However, gamma-globulins (or y-globulins) are transferred to the foal with the mothers’ milk for a few hours after birth.

As foals can synthesise the antibodies in sufficient amounts only after they are about four weeks of age, adequate milk intake immediately after birth is essential – which argues strongly against the practice of limiting the time foals are allowed to suckle their mothers, another method that has been proposed to help prevent diarrhoea.

If foals take up sufficient amounts of their mothers’ first milk (colostrum), there is no period in the horses’ early development where the levels of gamma-globulins are dramatically reduced.

And as Kuhl was able to show that foals with low gamma-globulin levels did not develop diarrhoea more often than those with much higher levels, the incidence of diarrhoea cannot be related to a weakened immune system.

Foals are born with very low amounts of bacteria in their intestines but are colonized by E. coli within the first day of their lives.

In contrast, the number of foals with Enterococcus remains low until about 10 days following birth, after which these bacteria can be detected in the majority of animals.

Other bacteria, such as Streptococcus and Staphylococcus, arrive even later, between two and four weeks after birth, by which time the foals’ intestinal flora is essentially indistinguishable from that of their mothers.

Interestingly, the researchers found that the changes in the bacterial flora closely parallel the development of diarrhoea.

Kuhl is careful to note that “we have not yet shown that diarrhoea results directly from the switch in intestinal bacteria, although our data make it seem very likely that this is the case”.

The implications are that foals are predisposed to developing diarrhoea at a very young age.

The horse is thus the only domestic animal where most young animals suffer from non-infectious diarrhoea, the researchers said.

As the condition clears up fairly quickly without the need for antibiotic treatment, food withdrawal or food supplements such as beta-carotene, breeders should simply accept that many of their animals will suffer from the condition.

Kuhl is happy to concede that “our result might not be exactly what horse-breeders or the feed industry hoped to hear”.

“Not all foals develop diarrhoea but the vast majority of them do – and do not suffer any long-term consequences from it.”

The research work in the study was carried out at the University of Veterinary Medicine, Vienna and the Graf Lehndorff Institute for Equine Science, Neustadt (Dosse), Germany.