The feral horse foot may not be the appropriate benchmark model for equine foot health, an Australian researcher has suggested.

The conclusion was reached by Dr Brian Hampson in his doctoral thesis exploring the effects of environment on the feral horse foot.

Hampson undertook his research as a member of the Australian Brumby Research Unit within the School of Veterinary Science at the University of Queensland.

The unit is attached to the Australian Equine Laminitis Research Unit, which is headed by world-renowned equine foot researcher, Professor Chris Pollitt.

Hampson’s project took four years and four months to complete and is considered to be the largest, most thorough investigation of the wild horse foot so far under taken anywhere in the world, the research unit said. 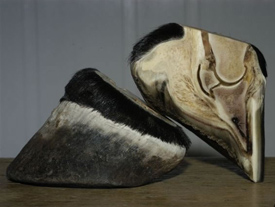 Hampson said the study was undertaken to explore the proposition that the feral horse foot is a benchmark model for foot health in horses and can be used as a guide to optimise care of domestic horse feet.

“The adoption of this model by some groups has shifted the focus of hoof trimming away from the traditional farriery model with a tendency towards excessive removal of the bearing border of the distal hoof wall and sculpturing the foot in the shape of the popular hoof model,” Hampson wrote.

“It appears that the paradigm model for the feral horse foot was obtained from limited studies of desert-dwelling feral horses and may not represent the general appearance of feral horse feet across a range of habitats.

“However, the foot morphology and foot health of feral horses has not been formally investigated in detail.”

In all, 14 studies of significant numbers of feral horses, ranging from 12 to 100 animals, were performed to investigate the genetic makeup, travel profiles, nutritional parameters, foot structure and health in populations of feral horses from different environments.

“The gross morphology [structure] of feet was affected by a combination of substrate (footing) and the distance that horses travelled.

“Travel distance was determined by the separation between water and food sources in the habitat,” he said.

He said there were marked differences in some conformation parameters between the feral horses in the current study and domestic horses from previous studies.

There were a total of 377 gross foot abnormalities identified in 100 left forefeet, he said.

There were no abnormalities detected in just three of the feet surveyed.

“The type and severity of abnormality varied between populations,” he said.

Of the three populations where feet were microscopically examined for evidence of disease, the incidence of chronic laminitis ranged between 40 per cent and 93 per cent.

“There appeared to be a balance between hoof capsule wear and growth rate in the hard substrate environments,” he said.

“Consequently, hoof capsules were short and often worn to the level of the peripheral sole.

“In the softer-footing environments, growth rate exceeded wear, allowing the hoof wall to grow long and flared. There were signs of pathology, such as ungual cartilage calcification, and traumatic laminitis, consistent with concussive changes, in the feet of horses living on hard footing.”

Some feet from high-travel populations appeared to have overuse changes such as excessive hoof wall wear, he reported.

“A combination of high travel and hard substrate was associated with the more serious foot pathologies observed.”

In conclusion, he said: “Given the moderate evidence of sub-optimal foot health, it may be inappropriate to judge the feral horse foot as a benchmark model for equine foot health.

“Previous observers and proponents of the ‘natural’ foot model were apparently unaware of this inner pathology but regardless, had made assumptions and recommendations for domestic foot care, such as promotion of solar loading and excessive bevelling of the distal hoof wall.

“This work highlights the importance of using empirical methodology, a large sample size, thorough investigation and independent, blinded observations to obtain data for use in the guidance of hoof care practice,” Hampson said.

“The practice of using the ‘natural’ foot model as the optimal morphometric model on which to base foot trimming practices may need to be reconsidered carefully.”

Hampson said his study identified the negative long-term implications of substrate and movement on foot health.

“Care needs to be taken in choosing one environment over another because of possible harmful consequences.

“Although feral horses living and travelling on hard substrate appear to have robust feet, modified by the environment and able to withstand locomotion over hard substrates, the current study suggests that there are some negative consequences associated with this lifestyle.

It was possible, however, that the hard substrate foot type, because of its robust nature and biomechanical function, allowed the feral horse to withstand significant foot pathology without showing overt lameness, thus assisting the horse to survive in extreme environments.

“In light of this observation, further research is required to fully understand the impact of various models of hoof care and footings on the health and well being of domestic horses in managed care.”

The Australian Brumby Research Unit in which Hampson conducted his research was established with the aim of investigating the feral horses of Australia and applying the findings to improve foot health of the domestic horse.

The full Thesis PDF document, in colour, entitled The Effects of Environment on The Feral Horse Foot, is available for $A50.