Pesky homeless people cluttering up the parks around the World Equestrian Games venue in Lexington, Kentucky, are going to be moved for the duration of the event. 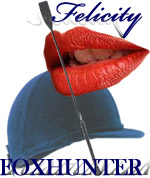 Phoenix Park is the most popular place for the homeless to sleep, particularly during winter, but they’re getting a short, sharp, shrift, because the Official Food and Beverage suppliers intend to peddle their wares there during the Spotlight Lexington festival. There will be live entertainment, and the homeless folks aren’t going to be part of the show.

But as Lexington Police spokeswoman Sherelle Roberts says, homeless people won’t be rounded up and arrested or harassed by police during the Games, and parks are public places. “People are allowed there. The homeless will not be treated any differently during Spotlight Lexington.”

Levity aside, yet another thing WEG has brought to light in Lexington is the need for “something to be done” about the homeless, according to Jessica Geis, vice president of Downtown Lexington Corporation, a city promotion group.

That’s a good thing, and yet another legacy for WEG in North America, albeit a local legacy.

Felicity wonders just how many of these homeless people – said to be up to 130 individuals – were once part of the equestrian or racing jet set.