It is hoped that the use of predictive analytics will provide key information to help save the animals. 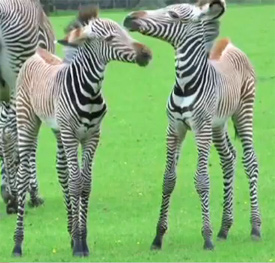 There are believed to be only 2500 Grevy’s zebra left in the wild. However, there is some uncertainty about the numbers because they range over a vast area and are notoriously difficult to count.

While Grevy’s zebra used to live across the Horn of Africa, today they are found only in northern Kenya – their stronghold – and small areas of southern Ethiopia.

The core of their range is in central northern Kenya where their numbers have stabilised and they appear to be recovering.

Marwell Wildlife, which has been working with Kenyan conservation partners for 15 years to conserve the Grevy’s zebra, has been conducting a survey on Grevy’s zebra in which local nomadic herdsmen are interviewed about their attitudes towards the zebras, what they think the key threats are to the animals’ survival, and where they think they are within this large area.

The herdsmen have very good knowledge about wildlife and interviewing them is seen as an efficient means of collecting information over the vast and inaccessible area.

Marwell is using IBM predictive analytics software to help identify patterns and analyse data which will help in decision-making on conservation measures for Grevy’s zebra.

By improving Marwell’s insight into herders’ attitudes through the surveys, and combining this with information from aerial surveys, camera traps and radio collars on the zebras, Marwell now has a more detailed understanding of the issues surrounding the zebra and are therefore able to understand the main threats facing the species, which allows limited conservation resources to be focused towards these areas.

For example, one of the main reasons for hunting is to produce traditional medicines from the zebra’s body fat. If herding communities were able to access modern medicines then the need for hunting would be much reduced.

Dr Guy Parker, head of biodiversity management with Marwell, said the predictive analytics software was critical in analysing the information collected from the field.

“The data from the surveys is vast and complex and requires powerful software to analyse it,” he said.

“The software is ideal for identifying trends and patterns from this data,” he said.

“This is the kind of complex multi-variate analysis that the IBM predictive analytics software is designed to tackle.”

Colin Shearer, predictive analytics strategist at IBM, said the work by Marwell took the use of the software to a new level. “It is great to see analytics play such a critical part towards the conservation of wildlife.”

Marwell and its partners surveyed the far north of Kenya at the beginning of 2010. Because the area was so difficult to survey, Marwell decided to interview local people.

Pastoral communities live across the whole of northern Kenya and move their livestock with the rains. They know a great deal about the landscape and its wildlife. Therefore, talking to them is the most efficient means of collecting information.

The far north of Kenya provides a link between northern Kenya and southern Ethiopia. This area is also vast and may contain large numbers of wildlife. In addition, there are currently only two conservation areas in the whole of the far north, so there is little protection for the wildlife there.