A completely preserved luxurious Roman chariot, unearthed with two horses from a grave in Bulgaria, has yielded spectacular detail about their construction.

The chariot was complete with a comfortable seat and even a boot (trunk), complete with contents. A museum is now planned for the site.

The chariot was among a raft of items unearthed from the Roman-period grave mound near the Village of Borissovo, in the Elhovo Region.

Scientists say the luxurious goods and personal belongings found in the graves were imports, indicating the buried people had been Thracian nobility.

Most probably they had been members of a wealthy aristocratic family living in a villa near present-day Borissovo during the second half of the 1st century AD or early in the 2nd century AD.

The researchers, headed by Daniela Agre, probed the burial mound, which reached 8 metres high and 60 metres across. It is the researchers’ fifth season in the field.

Seven burial structures and two pits were discovered. One of the pits yielded the chariot, together with the skeletons of two harness horses.

The chariot was completely preserved. It had been placed in a hole, one side of which had been slanted to allow the cart and horses to be driven into it.

“The analysis of the position of the horses in front of the cart provided the conclusion that they had been killed in the pit,” the researchers said.

Because of the narrowness of the pit, the wheel spokes had been broken, the wheels detached and placed at the walls of the pit. As a result, the hubs remained attached to the axles. The framework and the basket of the cart rested in their original places.

The cart was supported by stones in order to be fixed in an upright position. The complete chariot, with all components except the wheels in place, allowed the researchers to examine how all the parts fitted together.

The four-wheeled cart has no suspension. It had four-wheels, with a short basket and a seat. The researchers described it as “a very luxurious vehicle indeed”. It was designed to carry a charioteer (the driver) and a passenger.

At the front, the basket that held the occupants was open, the two long sides supported with timber beams and strengthened in the upper part with iron rims.

The seat was at the back of the basket to one side.

“All reconstructions of carts made until present were based on the assumption that this was a closed type of vehicle.

“The discovery of the Borissovo chariot offers the possibility to revise the reconstruction of this type of ancient vehicle,” the researchers said.

Even leather parts of the chariot were preserved. There was even a boot (storage compartment) situated behind the back edge of the seat. The boot was a new element in the construction in this cart type, they said. Until now, it had been believed luggage boxes were used, attached to the four-wheeled carts.

The boot proved that such storage compartments were part of Roman cart construction. The boot even had contents – a bronze pan and a set of a bronze ladle and strainer with long handles were lying at the bottom of the boot.

There was also an iron grill on which were placed bottles. Red-slipped vessels – a small pitcher, a jar and a bowl – were placed in front of the bottles. A clay kitchen vessel was found on top.

The bronze items were identified as Italian imports. The bronze ladle was even stamped on the handle with the manufacturer’s name.

The four glass bottles had been made by blowing in a mould and had been used for transporting and storing commodities.

The analysis of the position of the horses in front of the cart provided the conclusion that they had been killed in the pit. The animals were buried with lavishly decorated harnesses and a yoke.

The shape of the yoke could be reconstructed from the few traces of wood, the yoke rings and the silver ornaments of the horse collars.

The yoke was abundantly decorated with bronze appliques and had 13 bronze rings. The central ornament of the cart – an exquisite figurine of a panther on a solid bronze stand – was found on the shaft, between the skeletons of the two horses. 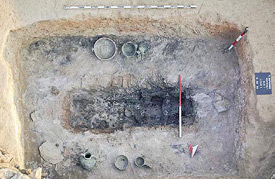 Bits were found on top of the horses’ heads.

A skeleton of a dog was unearthed behind the cart, tied up to it with a chain.

A second pit, which yielded two sacrificed riding horses of the Thracian warrior, was excavated immediately to the south of the first one.

The horses’ skeletons were lying in an anatomical order next to each other. Bits were found between the horses’ teeth and the bronze halters and the ornaments of the horse collars were taken and thrown on top of their bodies. There were timber shields with solid bronze shield bosses placed on the lower part of the horses’ bodies. The shields are round, about a metre in diameter. They were covered with animal hide, fixed to the wooden part with bronze rivets.

East of the pit, with the riding horses, the grave of the warrior, the owner of the chariot and the horses, was discovered under a special burial stone structure, the entrance of which faced south.

His body had been cremated there, in a two-stepped pit. The body had been placed on a special litter covered with a textile. The deceased had been buried in full armour: six iron spears, two swords, a poniard and spurs.

One of the swords was double-edged and nearly a metre long. It had been suspended on a leather strap decorated with gilded silver. Its scabbard ends with a bronze tip with tracery patterns.

Medical and sporting accessories were found. A bronze toilette box held two iron strigils (small, curved, metal tools used before the advent of effective soaps to scrape dirt and sweat from the body).

In a special drawer of the box there were medications crushed into powder and medical instruments made from bronze.

Apart from being a warrior, the deceased had been a literate person. An ink-well, a tablet made of bone, a bronze stylus tied up with a chain to the tablet as well as a spatula, which would have been used to spread wax onto the writing tablet, had been laid beside the body. 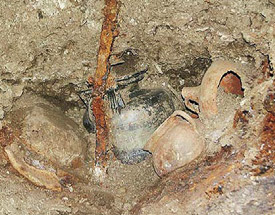 Ceramic vessels and glass lacrimaria had been put at various places in the grave pit.

Solid bronze vessels had been placed as grave goods on the upper step of the grave pit.

The researchers said the luxury goods and the burial ritual provided grounds to believe the deceased was a Thracian nobleman and warrior. He was a wealthy and educated member of the community, probably an officer in the Roman army in the second half of the 1st century AD.

Although Thrace had already been turned into a Roman province in this period, the Thracian aristocracy had kept its privileges.

Seven burials were unearthed under a stone structure in the centre of the grave mound. Three of them yielded skeletons of adults and the grave goods provided ground to suggest that these were females.

The shallow, rectangular grave pits yielded cremation burials and the cremation ritual had been performed in them.

The central burial was a female one. The dead body had been placed on a timber stretcher covered with a textile. The deceased had been buried with a large number of bronze, ceramic and glass vessels as well as with bronze, glass and bone personal ornaments.

All bronze vessels had been ritually cut into pieces before being placed into the grave pit.

The bronze appliques for toilette boxes comprise beautiful figurines of eagles and swans, masks of satires and deities, busts of deities, and so on. The burials yielded remains of walnuts and raisins.

The second female burial yielded a skeleton of a young woman, which also had been laid on a timber stretcher covered with a textile. The woman had leather shoes decorated with gold foil. The grave goods included ceramic and glass vessels, an exquisite bronze mirror, a bone spindle with a bone spindle whirl for fine spin, a bone comb, a bronze hair pin and a miniature bronze spoon.

Three of the burials are children’s ones and contained bones of babies. They had been buried in timber coffins, placed in grave pits. The fact that the children were the only ones who had not been cremated indicates they had been treated with special care.

The last burial in this group was the cremation burial of a juvenile. Part of the cremated bones had been gathered and placed in vessel.

State funds were granted for an emergency conservation of the cart and the horses’ skeletons in the two pits, as well as for constructing a temporary shelter protecting them against the hazards of the weather.

A museum is planned to be constructed on spot next year.