There’s nothing like a little ministerial cunning to liven up a news week, especially if it involves giving the horse industry some needle. 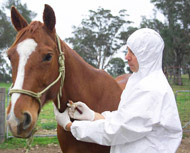 We’ve thrown “announced” in quotes because what exactly has the minister announced? He has, in fact, uttered nothing that we can find on the subject at all.

However, The Australian newspaper carried a report saying the minister backed the vaccination plan, despite opposition from veterinary advisers, the Australian Horse Industry Council and Harness Racing Australia.

What is going on here? Why wouldn’t the minister clearly lay out his position in a statement, rather than through the news columns of The Australian newspaper?

It would appear the minister has sown a very cunning seed.

Whether Burke could ever get the political support to push through voluntary vaccination is highly debatable, but that aside, this is a pretty big call.

Perhaps vaccination would reduce the impact of any future flu outbreak on the racing industry, but it also has the potential to mask any future outbreaks. That is a very serious downside.

It would also have a huge impact on trans-Tasman horse trade, raising the spectre of quarantine for all horses entering New Zealand from Australia.

So what has the minister achieved? Suddenly, there seems to be renewed energy within the horse industry in Australia to get agreement over a levy to fight future equine disease incursions.

If agreement is reached, perhaps the minister will graciously back down on vaccination and take the levy path.

There are many interest groups within the horse industry so the path to an agreement over a levy was always going to be difficult.

The federal government had proposed the horse industry become a party to the Emergency Animal Disease Response Agreement (EADRA), already covering other livestock industries, whereby horse owners could be levied to meet the cost of future outbreaks.

However, the government got a nasty kick in the teeth when enabling legislation was defeated in the Senate in February 2009.

The main stumbling point was perceived unfairness over how the levy would be charged.

If the minister was smarting over that defeat, and determined to get the horse industry to think again, he has certainly done that.

If the hurdle of ensuring the charges are fair can be overcome, it seems that industry support will follow.

It is worth noting, too, that the levy is not a fait accompli. It would be charged only if a disease outbreak had occurred and there were costs the state needed to recover in fighting the incursion.

The minister’s manoeuvring may be somewhat unconventional, but he has certainly needled the Australian horse industry enough to get some action.