The world’s oldest equine twins, Bill and Ben, have chalked up another milestone, reaching 25 at their seaside retreat in Wales, where they continue to keep staff on their toes.

Bill and Ben are not only the oldest horse twins in the world. It seems they may also be in the running for the title of the naughtiest.

“They are still naughty,” says Julianne Aston, the driving force behind the Veteran Horse Centre farm at Cardigan. “They’re actually getting naughtier, but more funny than anything else,” she says of the loveable Welsh ponies.

If there’s mischief to be done, Bill and Ben are sure to be at the centre of the action.

“They are like naughty children,” Julianne says. “They’ll pick up brooms, buckets. You can’t leave anything against the wall.”

The pair can also be found on occasion playing with the latch on their stable door.

Mischevious they may be, but there is never any malice in the antics of the inseparable pair, who have been together all of their lives.

Julianne says the twins got through winter well and turned 25 in April. It’s now the height of the northern summer but Bill and Ben are unable to enjoy it in quite the same way that other horses do.

The twins, who stand at 11.2 hands, are cremello and have sensitive skin. They are prone to sunburn around their eyes and nose. “The bright sunlight in the summer can hurt their eyes,” Julianne explains.

From May to August, the pair usually spend their day out of the sun in a wood-chipped area in the centre of a Dutch barn, where they are given hay to eat. Come nightfall they are rugged and can enjoy the night outdoors, but on restricted grazing because of the ever-present risk of laminitis.

In the cooler and duller winter months they spend their days outdoors, but come in for the cold nights.

The pair are in good health, Julianne says. “They had laminitis a couple of years ago but nothing since then.

Laminitis remains a threat, however. They are watched closely and at the slightest hint of discomfort in their feet they find themselves back in the barn on a hay diet.

“If we feel their feet are getting sore they are back in the barn 24 hours a day,” she says.

The key to their diet is keeping their fibre up and their protein down.

“The only other thing we have to watch is that Ben can get very cold very quickly.”

“Bill is a little bit tougher.” 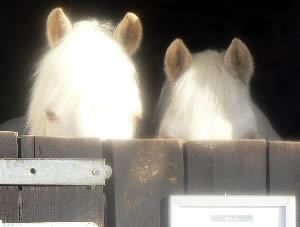 Bill and Ben still enjoy the company of a shetland pony named Tommy, who goes out to play with the pair when circumstances allow, although Tommy is also on reduced rations because of the laminitis risk and can’t spend too long on pasture.

To say that Bill and Ben are identical is an understatement. “We used to be able to tell them apart by their mane,” Julianne says. One had a shorter mane but it has since grown out.

“The only way to tell them apart is through a mole that Bill has on his muzzle. They are so identical.”

Julianne says Bill and Ben have been tremendous ambassadors for the Veteran Horse Centre. They have done the society a lot of good by helping to raise its profile. People love visiting to see the twins, she says.

Their fans extend as far as New Zealand, Australia and the United States.

The Veteran Horse Centre has 24 horses in its care, half of which are over 30. The youngest is a former police horse, aged 16.

The society will rehome horses without ailments or problems, but those who are too old, have a need for ongoing care, or have formed bonds that would be cruel to break, have a home for life.

Bill and Ben are fine ambassadors for their species. They spent most of their lives at London Zoo in the children’s petting zoo. The Veteran Horse Society rehomed the pair about six years ago at the request of the zoo.

However, their new carer got sick and before long the twins were returned to the centre, where their celebrity status began to grow.

The Veteran Horse Welfare Society began in 2004 and is understood to be the only British charity solely dedicated to the care and welfare of older horses. It funds and runs two rehabilitation centres.

The Veteran Horse Society began life in 2001. It is regarded as an authority in Britain on the older horse or pony. The society concentrates on showing, membership and equine passports, as well as having a large rehoming programme. The society funds the Veteran Horse Centre head office in Cardigan.

Want to keep up with the exploits of Bill and Ben? Fans can adopt the pair for a year for £20, for which they will receive regular updates on the activities of the dynamic duo, including pictures. For more information, visit http://www.veteran-horse-welfare.co.uk.