Meet Bill and Ben, who, at 24, are seeking recognition as the world’s oldest living horse twins.

The pair are inseparable and live out their days at the Veteran Horse Centre farm at Cardigan, Wales, where they take their roles as equine ambassadors very seriously.

Bill and Ben have had plenty of practice spreading the good word about horses. The twins spent most of their lives at the London Zoo, being big attractions in the children’s petting zoo.

The cremello Welsh ponies became part of the Veteran Horse Society’s family in 2002. The zoo asked the society to re-home them. It did so, but their new carer later became ill and the pair were returned to the centre, where their celebrity status began to grow.

Society founder Julianne Aston says the pair are literally inseparable. To her knowledge, they have never been apart.

The Guinness Book of Records has received a submission that the pair are the oldest equine twins and are considering the matter.

They are huge characters, she says. “They are very cheeky, like naughty schoolboys – squabbling over the doors and arguing over food; pushing each other around and generally causing havoc in the yard.”She says there is never any malice in their play. “They’re very vocal and love playing,” she told Horsetalk.

The pair are well used to working together. “Yes, they can definitely work as a team, pinching things from the grooming kit and throwing them over walls.”

One of their best mates is a “naughty” shetland named Tommy. They also enjoy the company of Alibi, Hercules, Chloe and Milly.

Bill and Ben, who stand at 11.2 hands, enjoy good health, although staff are careful to ensure they don’t get overweight.

While both are broken to saddle and harness, they are now long retired, instead earning their keep by promoting the care and welfare of older horses.

The duo have a daily routine that would be the envy of many horses. 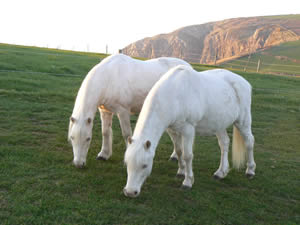 They are brought in at 8am and fed and groomed. They then have access to a large indoor barn and a small restricted grazing area. They have access to hay and play-balls, which they can push around to have small pasture nuts drop out for eating.At 3pm they are they taken to the top paddock and turned out all night for the warmer months. In the winter they are brought in at 3pm, groomed fed and rugged up for the night.

Julianne says their grazing in the top paddock is also restricted, to help keep their weight right.

Being cremello, Bill and Ben are prone to sunburn around their nose and eyes. The pair motor through sunblock in the summer months – a large tube each a week.

“We put it is put on their nose and carefully around their eyes, so it has to be the gentle variety. They never have access to long spells of sun. We treat them like newborn babies.

“All our pink-nose horses also have suncream, so we get through about 20 tubes per week. “It costs a fortune, but it’s very necessary.”

The ongoing care of Bill and Ben, and other elderly equines, is down to the work of two sister organisations, the Veteran Horse Welfare Society and the Veteran Horse Society. Both were founded by Julianne Aston.

The Veteran Horse Welfare Society is understood to be the only British charity solely dedicated to the care and welfare of older horses. It provides a home for more than 20 unwanted or neglected animals. It is manned by volunteers and works with the Veteran Horse Society to rehome hundreds of horses around Britain.

Founded in 2004, it relies purely on donations to survive.

The Veteran Horse Society began life in 2001. It is regarded as an authority in Britain on the older horse or pony. The society concentrates on showing, membership and equine passports, as well as having a large rehoming programme. The society funds the Veteran Horse Centre head office in Cardigan.

It has 10 yard and office staff, who cater for the needs of horses, and help individuals with all aspects of feeding and management of elderly equines. It is one of only seven equine passport-issuing offices in Wales, and, again, is solely funded by membership and donations.

Julianne says anyone wanting to contribute to the ongoing care of Bill and Ben, or any other elderly equines under the groups’ care, will be promised regular updates and news.

One thought on “Bill and Ben world’s oldest equine twins?”